Everyone's favorite crocodile-dog is here to flop around and give your robot AIDS.

It's 4 (four) eyes have bright green LEDs in them that can glow in darker environments. Saw applies a green paint smear on the opponent. Might or might not make a mockup of these. We'll see if I can do so before the deadline. 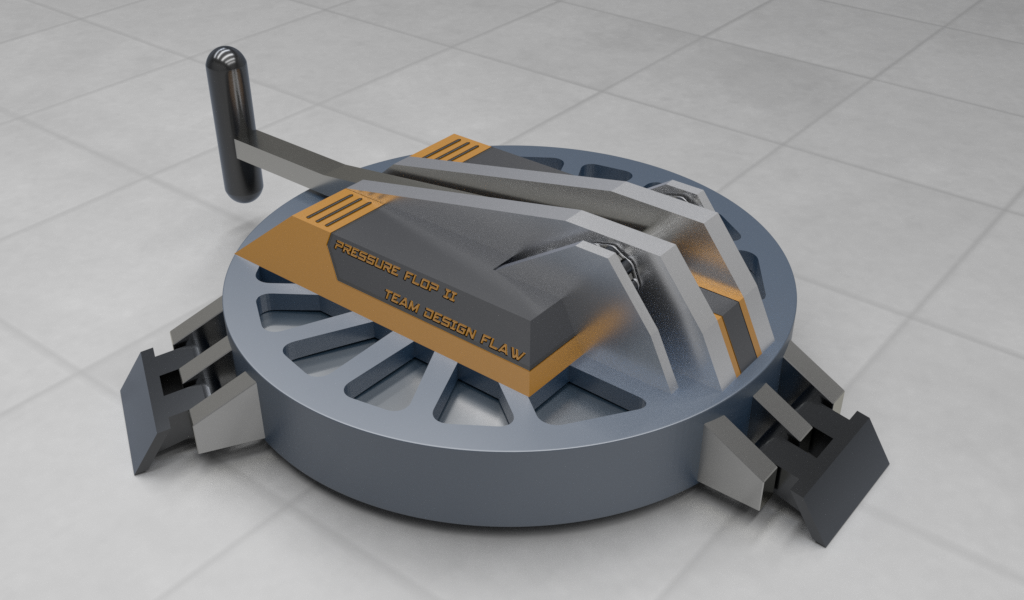 Pressure Flop II by YSMQTHLQYH on Sketchfab
Shuffling turret hammer, the shell looking thing is a turret. It is mounted like a normal turret but also has rollers on the sides (like in a ring spinnner) for additional support.
The hammer is pneumatic, i have the option to fire it at half power, mainly for retracting it and for self righting.
See the three things around the turret that kinda look like hinged wedges, they can work as such but their main purpose is to use them as contact points to allow me to get away from a bot under me using the turret, should be rather intuitive how they work.
More images
Show 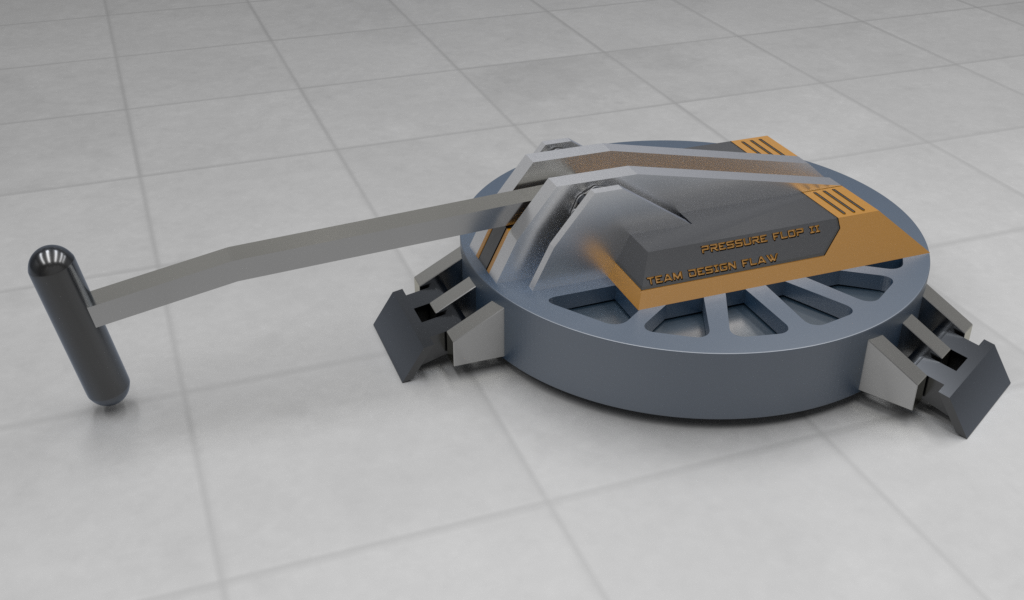 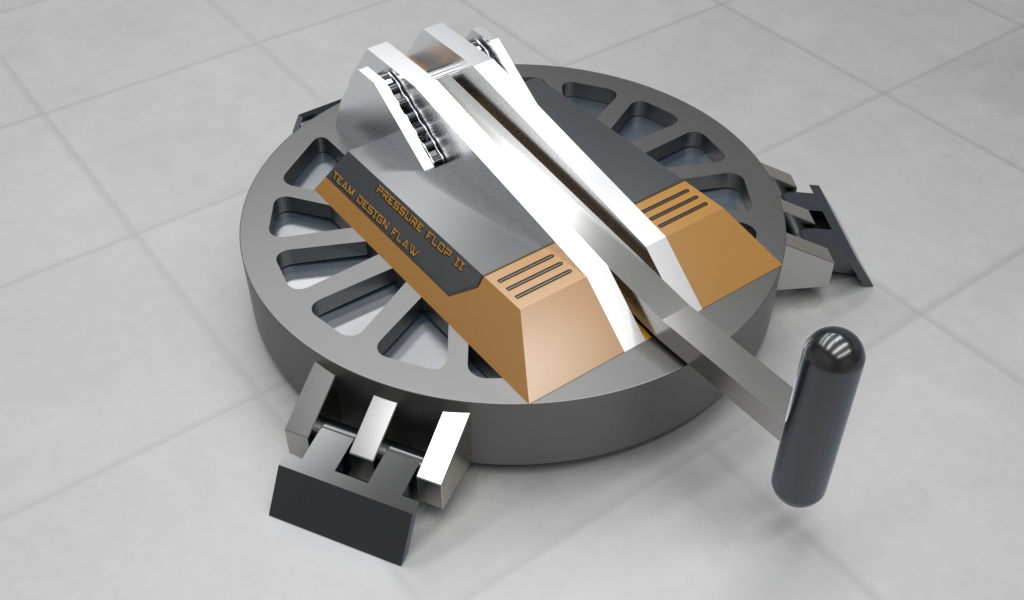 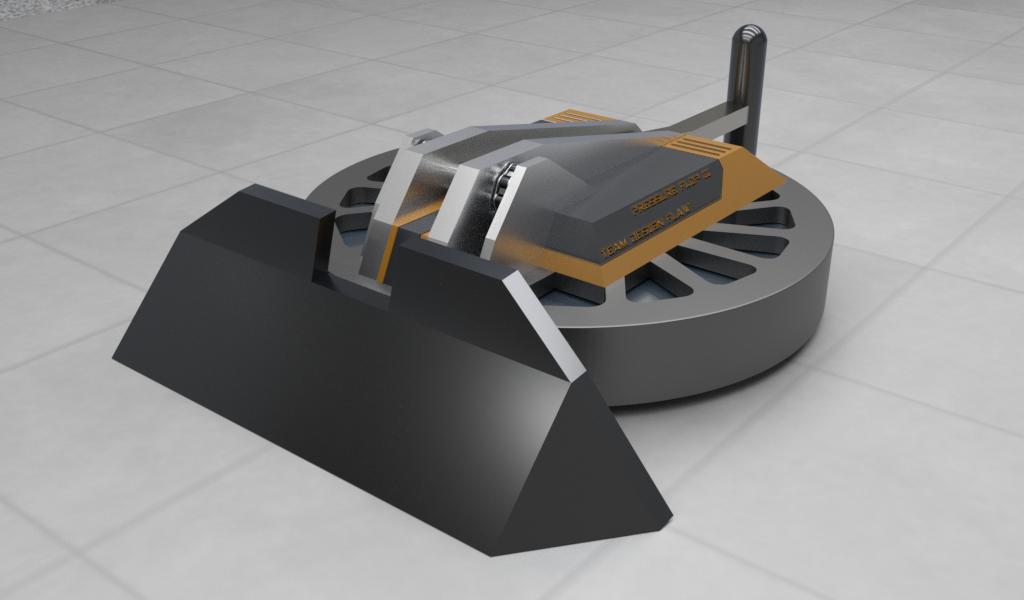 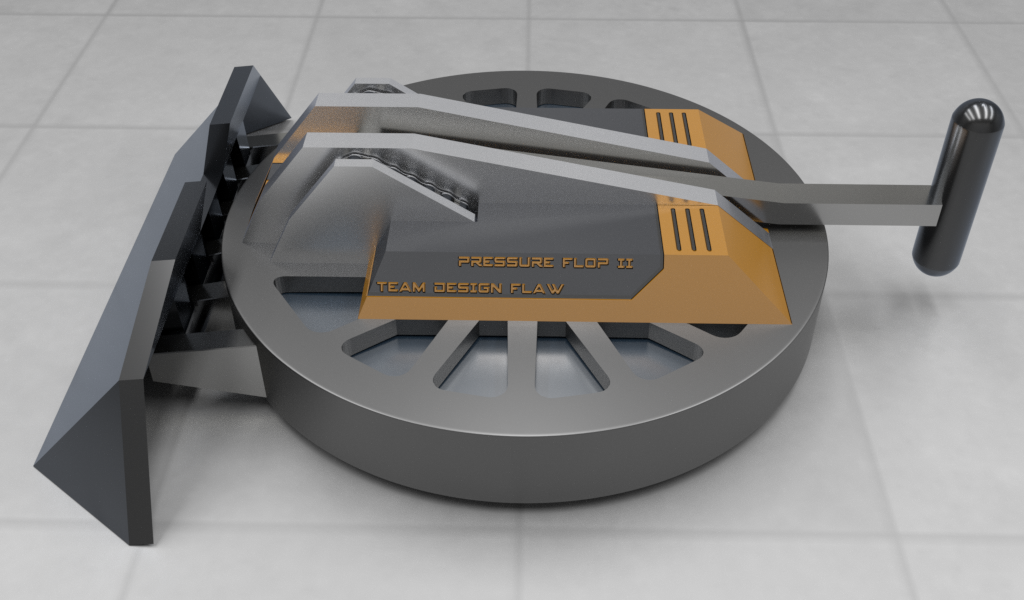 Re: Acrid vs. Pressure Flop II

Acrid: 7/5/3/6/9 saw config
I was expecting him to go for the plow tbh.
Pressure Flop II: 3/1/1/19(14 hammer / 5 turret)/7 turret config The thing has 9 armor, i deal a total of 6 damage and 5 shock damage per hit anywhere. Suffice to say that i will only need a couple of hits to get the KO, the first hit should disable something important. Even one hit will compromise something important.
He can flank the turret if he specifically wants to and is close to me(he can't from far away) but i can counter it by turning my whole bot as always if he really commits to the flanking. If he tries a bit of angling the turret is fast enough to keep up so he really needs to try to get to my back if he wants to get under and not get hit.
If he tries the bait approach i can guarantee a head to head, i have a shot at getting my wedge under to deny his attack from that angle. Anyways if this happens just let him come in, he is long enough to get hit from up close so don't fire until our wedges make contact or something to not get baited.
If you don't buy the turning the bot then also note that after getting to my back he needs to turn to face me and that gives me like a second for the turret to catch up to his small speed advantage. Also note that with -2 control he is likely to fuck up that move, giving me the hit.
Basically i can keep calm and let him stress out, he has to either survive 3 minutes without taking many hits (not happening unless he chickens out) or find a way to kill me. He has no way of getting an OOTA so his only solution is to go for the colorful fatales in the corners.
He will need to get them to at least orange to do some real damage and he will probably fuck up his wedge while doing so if he tries to get more than one of these in. Trying to do this will take a while and give me time to get wherever i want in the arena, turning multiple fatales on will take forever.
Anyways start the fight rushing to the middle while pointing my turret to Acrid at all times and prepare for him to come at me. If he tries to use his speed to activate the fatales try to see if he is turning all of them on or only a few. If he spreads out to all stay right at the middle to give me more time in whatever direction he eventually attacks me. If he only turns on one or a few then head to the corner opposite to those, he will need to first attack me from head on and heavily risk a big hit. Even if he pulls it off a white hit wont do much and he still has a long way to go for a fatale, no bueno for him. GL HF
TEAM DESIGN FLAW
Recent history
Yeezzus this signature is too big, lets try to make it a bit more compact