I had this idea for awhile, why not make a challenge thread so people can challenge people?

Problem is that we need a writer for this, but hey, RB2 is on and going--and i think most of them are free.

UPD8: I decide that it's time that i stepped up to the plate and began my shenanigans as a writer, wish me up&#33;

I will be using my middleweight Lieutenant Chaos:

Anyway, yeah, that's my idea, i'm not sure if this will go far, but hey, i'm throwing shit at the wall and seeing what sticks.

Double post, but I guess it's time to take this for a spin, i guess.

I really want to take Neophyte Redglare off for a spin, so i'll be using her.

Anyone up to challenge me?
winter! she/they pronouns, trans rights babey!

I'll be using a new bot, Triple B. 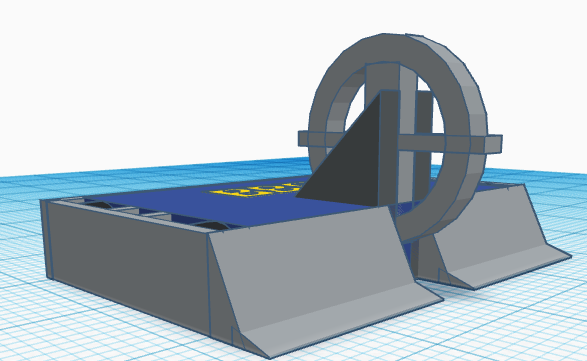 Righty then, challenge is locked in and ready to go.

I have a minor advantage speedwise than Triple B. I'll wait until he makes it halfway across the arena, and then proceed to rush him, targeting his sides. Triple B's sides do not have wedging, so he's prone to my wedge, and flipper.

I'll push Triple B around the arena, mainly near the wall drums and pulverizers, and the OOTA zone, whenever i get near the hazards, move so Triple B is on top of my front-hinged flipper and launch him at the pulverizers and wall drums.

Be aggressive, chase Triple B around the arena, at every opportunity that i have to get at his sides, i'll get it.

Looking at the stats, NR has a speed advantage. This isn't going to help much, as:

1) It's only one point, not enough to get around.

2) It has speed:traction difference of 3, meaning it will be a bit slidy.

So, NR can't really get round me, and it has armour 4 less than my weapon.

Only strategy I really have is to repeatedly try and go for the wedge, and try and knock it out via many repeated hits.

Alternatively, I could try and launch it OOTA with the flywheel.
Top

Whelp, i'll try to write, so here we go.

--
"In the red square, we have convicted you guilty as charged&#33; You have therefore been sentenced to be executed by.. NEOPHYTE REDGLARE&#33;"

"In the blue square, this bot will send you to Point A to Point B faster than John Pinette on the slide at the water park&#33; Give it up for, TRIPLE B&#33;"

And that's the last straw for Triple B, the sheer velocity and the impact on the arena causes the bot to shut down&#33;


And your winner, by knockout is...

Gonna do another match challenge.

Exactly the same as last time, will be entering with Neophyte Redglare:


Joking aside, i'm down to write the match. "but sylandro, you already have enough on your plate as it is&#33;" I have RB2, which week 2 is delayed, ARC: vexed, which won't happen soon, and now this.
Last edited by Sylandrophol on Sat Feb 18, 2017 11:38 pm, edited 1 time in total.
winter! she/they pronouns, trans rights babey!

After this next challenge I guess I could good something in as well. 4 wheel trackball drive disc spinner. The large disc is sandwiched in between the body and is tilted at an angle in order to hit incoming wedges. Invertibl

Anyway, so it's probably going to be Neophyte Redglare V.S Outrage if i'm reading this right?

<del>should've entered trojan horse but it's too late for that now :dirk: </del>

So he beats me out in drivetrain, but also has a 3 point gap in SPD/tra which could cause skidding. His wedge is also very tall and steep. This is basically asking for Outrage to hit it.
So spin up, and drive out of the square. If I see that he is about to rush me, stop immediately and begin to slowly spin in place like a thwack. With this, he will have no choice but to get hit. If he doesn't fall for this party trick, use the trackballs to keep the front facing, and drive towards him. Same rules apply if flipped. Continue hitting him with the disc until he is no longer moving. Avoid hazards and the Outa zone.

Neophyte Redglare V.S Outrage is in it I guess. It's time to arr pee, Mr. Freeman.


I have a minor advantage over speed than Outrage, and my armor means that i could tank his giant-disc-of-the-apocalypse, not sure. As soon as the match begins, boxrush Outrage.

Do not, under any circumstances, let Outrage spin up his weapon, deny any spin ups, and push him around towards the pulverizers and wall drums, and when he gets on top of my launcher, launch him, maybe i'll get pretty zany and launch him towards the OOTA zone.

Be aggressive, chase after Outrage, target his back and sides, so his wedge-murder-fucker-spinner has little to no effect on me.

Camp near the OOTA zone and hazards, and make sure to launch him at any change i get.