This is Vexed
If the name didn't give it away or you are unfamiliar with the Vex Robotics Competition/FIRST robotics, this will be a 2v2 Lightweight tournament based off the VEX/FIRST tournament style.

1) This will be a 2v2 tournament. Each match consists of 4 bots in the arena with 2 bots per team. This isn't tag team like CBC, but a full 3 minutes of 2v2 action.

2) Each person can enter one robot in the Lightweight division. The maximum number of robots in this tournament will be 20. If there is somehow not enough interest to get 20 different people entering, I will allow trusted ARC members to enter two bots on a case by case basis.

3) Signups are open now, and will last until Saturday April 11th at 11:59pm UTC or Whenever theres 20 entrants. The first round of the seeding matches will begin the week of April 13th.

4) RP Threads and the Fight Card will be posted on Sunday Nights or Monday Mornings, and all RPs for each week will be due at MIDNIGHT UTC on Sunday (When the date changes from Saturday to Sunday). This is different from other tournaments, but to avoid stupidity with potential timezones changing due to DST, I'm basing the RP deadline off UTC which doesn't change. Use wolfram alpha or google to tell you what that time is in your timezone.

I'm planning to write all the matches for this, so each week's results may come out a little later than the weekend.

1) There are no conferences or groups. (In official VEX tournaments there are conferences but that is due to the sheer number of entries for some tournaments)

2) Each match will be between four random bots, and there will be 5 fights each week. It is possible that someone who enters two bots may end up with one on each team or both on the same team.

3) Every bot will fight in these first four weeks, meaning four matches per bot to rack up score and win record.

4) After these 4 weeks are up, Bots will be ranked based off their four matches based off wins, points scored and the point score of the opponent teams from their matches.

5) The top 4 robots will then choose an alliance of 3 bots total (including themselves) to proceed into a single-elimination Bo3 match against the other top 4 seeded alliances.

6) The winner of both Bo3 Eliminator matches will be the winning alliance, which will then face off in a 1v1v1 showdown to determine the true winner. Each team starts in their coloured squares. There are OOTA zones behind two of the squares (They're equal in size, im just bad at drawing) and Pulverizers (8 damage each) behind the other squares. There are also two sets of killsaws (6 dmg) closer to the middle of the arena, two sets of screws on each side (like the ones that Scorpios? got stuck on in ABC Battlebots S2), and two sets of spike strips along the top and bottom walls. For the sake of consistency in writing, the walls of the box are 3 feet tall around the OOTA zones, meaning its going to take a decently strong flipper to get the opponent OOTA. No 1-power flipper shenanigans OOTAing someone.

1) Each match will last 3 minutes. If both robots on a team are knocked out before 3 minutes are up, the match will end early. If the match reaches this 3 minute limit, it will go to a judge's decision.

2) For matches in the Eliminator stage of the tournament, additional rules apply.

A) All three bots of the alliance will fight in at least one match.
B) No one robot can fight in all three matches of the best of three.
C) Due to the above rule, the same two robots can not fight in back to back fights (Bot A and Bot B can fight in match 1, but for match 2 one of A and B has to swap for C. For a third match, whoever was swapped out for the second will fight along side C in the match)

3) For the first 4 weeks, the RP thread will be made by the tournament admin (me) to allow for easy formatting.

4) During the Eliminator stage, each alliance captain will be required to message the tournament admin (me) with the two bots that will be participating in each fight by WEDNESDAY AT 11:59PM UTC. The RP thread will then be made. If an alliance does not inform the tournament admin about who will be fighting in the match, the tourmament admin will decide for them.

Alliance Selection
The top four scoring robots will be the captains for selecting the teams of 3 to continue on into the eliminators. The first place bot gets to pick their first ally first, followed by second place, third place and fourth place. The order then reverses, with the fourth place picking their 3rd teammate, then third, second and finally first.

The captain can pick any bot ranked lower than themselves to offer an alliance. When a bot receives an alliance request, they can either accept and be a part of said captain's team, or they can decline. If they decline, they cannot be offered to join another alliance. In the case that the first ranked bot asks someone in a captain position (EG. The third ranked bot) to make an alliance and they accept, the fourth ranked bot moves up to third and 5th to 4th.

If your bot is outside the top 8 teams, it is impossible to be an alliance captain, so I do recommend accepting the offer if you get it.

Once the 4 teams of 3 bots each are chosen, the tournament progresses to the elimination rounds, where each match is Best of 3.

We will be using the ruleset from CBC4 with a few changes.

Changes:
Declare your configuration - Since there will be no configs that can change stat/weapon types and a limit on wedge types, there will be no need for declarations. The limit on Wedge types is 2, so you can have a regular wedge and one with something like a hammer blocker for example. Or you can have 1 wedge and the option to not run the wedge (but nothing that changes stats).

3.1d: Flippers and Other Flipping Weapons
Flippers will flip robots 0.75ft high per weapon point invested. With the OOTA walls being 3 ft, you will require a flipper with greater than 5-6 power to reliably OOTA, although those with 5 power exactly may get lucky.


3.5f: Flails
Flails are not a legal weapon for this tournament, due to risk of unintentionally hitting your ally and/or because I don't like them.

4.5: Slithering 5.3: Multiple Configurations
There will be no configs allowed that can change stat/weapon types.

I like Great War and 1920s aviation. Aesthetically, it's just cool. I also have a penchant, which I've put on the back burner for a while, of designing very...questionable robots. Paying homage to each of those tendencies is...

BLITZ by FloatingCastleRobotics on Sketchfab


What is it? Well, it's a radial ICE-powered x-axis spinner. No, it's not going to stall when you inevitably flip it. Just like the airplanes that it's based on, it has a dry sump, pump, etc. setup that allows it to run inverted. If you look carefully, you'll see that the blade sweeps very low to the ground at the front. 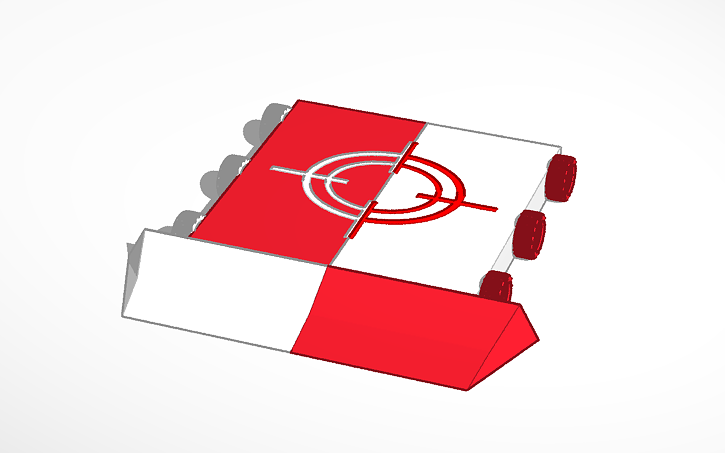 and the anti wedge forks 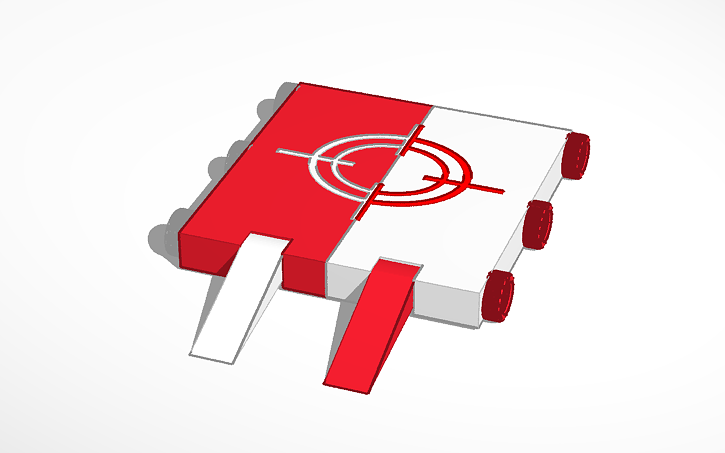 It's about time I retired Golden MADD. Taking it's place is a 4wd swiss army shell. The teeth can be mixed and matched (and even mounted upside down) all different sort of ways. 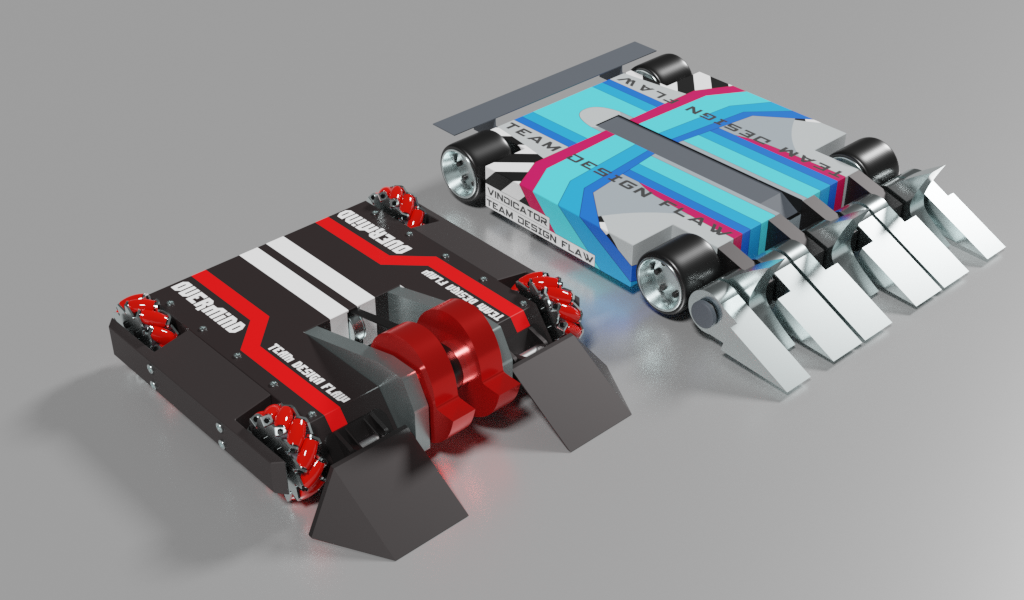 Stats:
TEAM DESIGN FLAW
Recent history
Dirty Dozen -
Something Something I Regret Nothing 0-0
I Suck At Names II 0-0
OTSC v2.0 0-0

Okay, let's get this going. 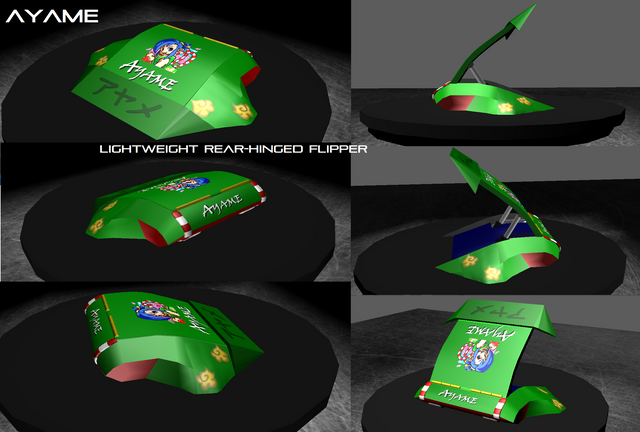 She's back again, and about time, too! The plucky kunoichi and acrobat from Capcom's Power Stone returns for another shot at a lightweight title, bringing plenty of speed, agility and extra defence to constantly take the fight to even the most heavy-hitting designs, and introduce them to her tricky low-pressure pneumatic flipper. This time as well, she's also got some extra tricks from her Kunai Wedge attachments and improved armour, ensuring that she's ready for just about anyone. Don't be fooled by her cute demeanour and her cheerfulness; once Ayame's in the arena, she's one seriously tough contender! 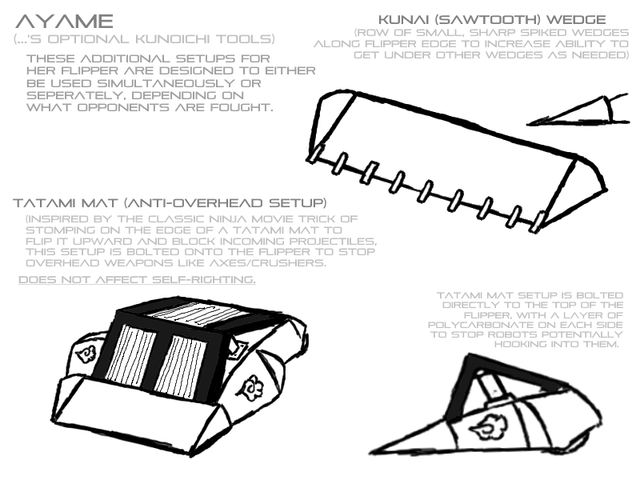 Speed: 8 Traction: 7 Torque: 3 Weapon: 0 Armour: 12
4-wheel driven hinged bricky wedge, as stubborn as an Apennine Wolf! The flag is purely for decoration and will snap off when flipped, the wheels stick out of the back slightly to ensure that (hopefully) one wheel will be on the ground at all times. All of the underall wedges are hinged individually on the same axle [INSERT IRL EXAMPLE HERE]. The ‘horns’ on the Wedgelets stop them from getting stuck up or down at a bad angle.
Last edited by Botomatic1000 on Sat Apr 11, 2020 3:46 pm, edited 2 times in total.
Top

I'm too much of a hipster to enter a VS when that's what everyone is doing, so instead, here's...

Omicron32
Click on images for full-size versions.
This isn't your average 360 lifter: it's also a fully functional 90s game console, featuring beloved games such as "Dangerous Streets" and "Kang Fu". The two drive pods are connected by a solid shaft running through the middle of the lifter axle.


Forks and anti-MT spikes are removable.

Trilobite! 2! is an evolution rather than a revolution, based as it is on the team's surprisingly successful lightweight entry to CBC4. It's gotten a lot better in some pretty obvious ways - the increased frontal armour, the anti-monstertrucking spikes, the fact that it can drive upside down - but there's been no radical design overhaul that makes it a different machine to the speed wedge it was in mid-January. Nevertheless, it's had some serious work done. The wheels are considerably larger and more powerful, the spikes help it deal with other wedgebots, and the reinforced front armour is now capable of taking hits from deathspinners instead of disintegrating in a shower of wedge fragments. With the speed to box-rush weapon-based opponents and the dexterity to put on driving masterclasses against enemy controlbots, there's room for Trilo 2 to become a serious contender.
Last edited by Rocket on Tue Apr 07, 2020 12:04 am, edited 3 times in total.
TEAM WORST SWORDSMAN
"The world's best swordsman doesn't fear the second-best; he fears the worst swordsman, because he can't predict what the idiot will do."

Didn't feel like rendering something stupid, so you get this old render from about... 2017.

4-bar flipper. silver wedge/forks hinged, limited 25 degrees up 5 down to prevent weird folding incidents. 2.5 inches tall - accommodates for compact shape by having minimal CO2 storage (air tanks hold enough air for 5 flips), and an onboard compressor. this gives it functional infinite flips, it just can't really do more than 5 in a row.

my bot
fork the wind:
4 wheel drive (short wheel base) with forks and 3 prong vert built to do outa;s


Molten is one of the first Shell Spinners ever created in the TBR team and will make it debut, this bot is 4WD. 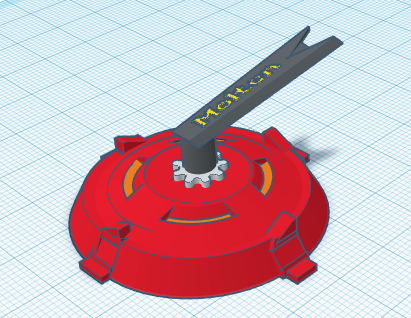 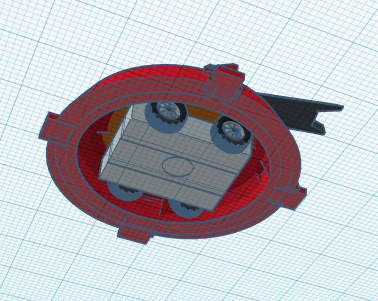 Fam how THICC ARE YOU
(Answer is? She hella thicc

2WD bot with doubled wheels and anti wheelie bars/wheel guards (the latter is removed when using the second plow). Starts as a dustpan and becomes a shameless cheese wedge when inverted. Has sprung teeth on top of the cheese wedge that prevent monstertrucking, which fold into the bot when not in use. Comes with a regular dustpan option and a