Speak freely but don't be stupid about it or you'll find yourself on the last train to Clarksville, ya dumbass.
Post Reply
57 posts

I wouldn't bother, he's not interested in competing anymore anyway from the looks of it. >_>
Top

<blockquote class='quote_blockquote'><dl><dt>KodeBreaker</dt><dd>Feb 15 2014, 09:34 AM</dd></dl><div>I wouldn't bother, he's not interested in competing anymore anyway from the looks of it. >_>[/quote]Pity. I mean, we could definitely do with a few more competitors here.
ICE³ ROBOTICS
"Tougher than a glacier, more might than an avalanche, more fury than a blizzard, and more burning passion than a volcano."
Top

My magnum opus.[/quote]lol the dubs
Top

Fuck it; time to resurrect this thread.


an ancient evil has awakened ~V900
Naw, Laz went to bed early tonight. Fucker's closed his door and the light's off. ~Monsterworks
i guess he counts too ~V900 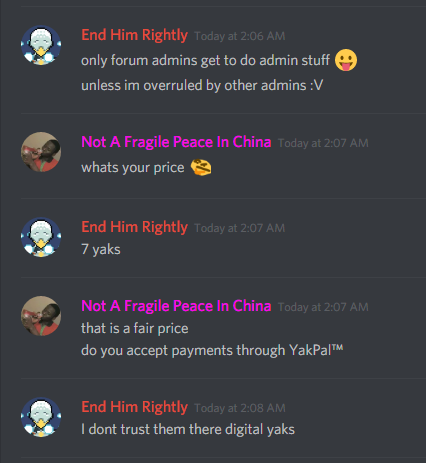 These need archiving if not already. Also, necroing a thread because eat a dick.

I never saw DRD say this:

"I am quite curious as to what Philip would be like drunk."

Just to answer that question, it depends on what. Those at the ARCCon where we went bowling can attest that beer makes me gassy. Very gassy. I think they would have made ride all the way back to the hotel with my keister pointed directly out the window if that didn't violate Pennsylvania's strict seat belt laws.

Not to toot my own horn too much, but my response to V900's Burger Princess has been deemed signature-worthy, so I figured it warrants a repost.