by attackfrog
So I heard you like Black Dogs. In the spirit of White Cat, here's... 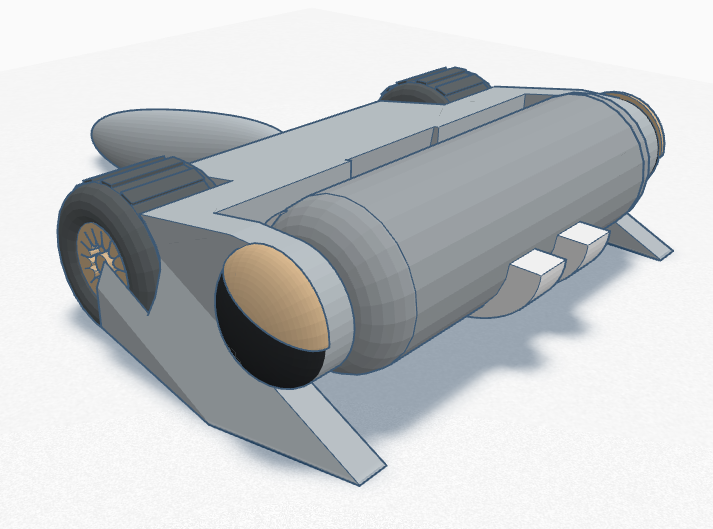 It's got two big buck teeth to bite you in the nuts, and lest you think I'm just wasting the rest of the drum, there are some smaller molars in the back to balance them out, for when Grey Squirrel would rather chew on its food. 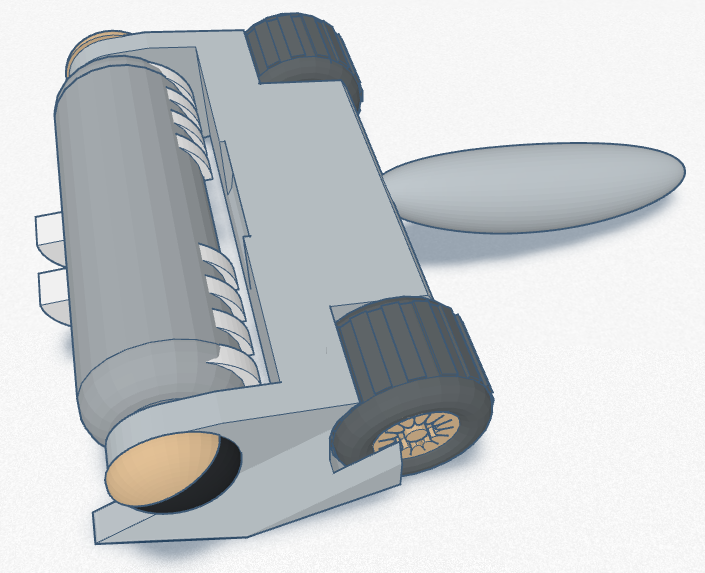 The tail is entirely decorative, and is supported with a flexible wire to keep it from getting into the wheels or whatever. I might just take it off for fights anyway <del>or leave it on and use it as an entanglement device</del>.

When inverted, Grey Squirrel's drum will hit the floor, so it will self-right by spinning up or doing a Witch Doctor and driving up against the wall to let the drum push it back over more easily.

I've been meaning to make this robot for a while, I just didn't think it was interesting enough. Maybe the buck teeth will make it interesting, maybe not. Either way, I'm back at TinkerCAD for now because Blender just takes too much effort for a demotivated person like yours truly.

Stats would be close to Black Dog's I imagine but as always I'll leave that for later.

by Sylandrophol
ahahahaha, that's really clever, i like it

by attackfrog
More robots? Does this mean I've overcome my robot-creating apathy? Maybe&#33;
I'm considering these to be works in progress, except for maybe the last one.

A pretty boring horizontal spinner with side skirts and a Megabyte pole. Probably not going to do anything more with this, but it was a good experiment. Maybe if horizontal spinners get buffed at some point I'd use this, but I'd probably just make a new one instead. 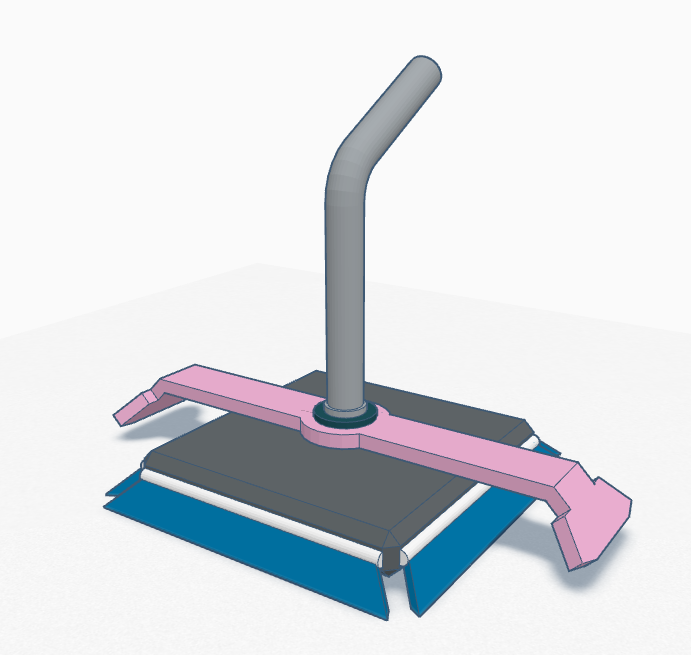 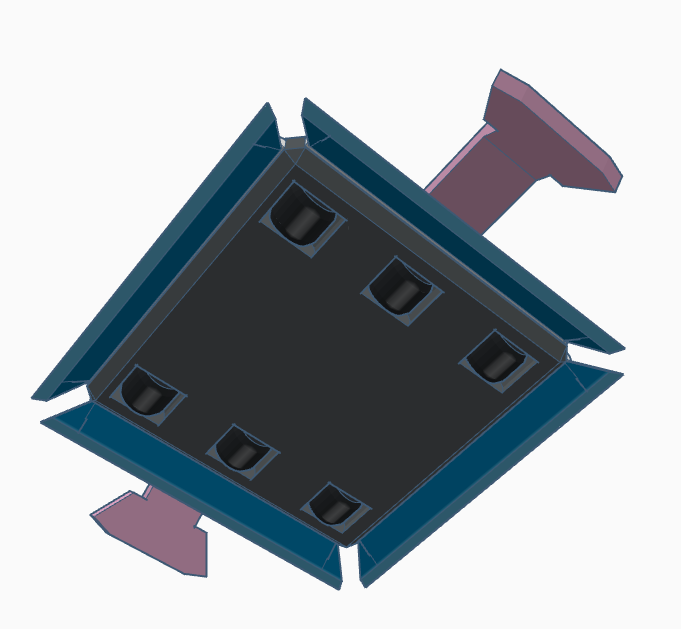 A bit of an iteration on the Rogue Wave idea. This time the lifter is wider, in the middle, and can rotate 360 degrees. The connection to the body of the robot is a bit too thin to be plausible, though, so this one still needs a bit of work. 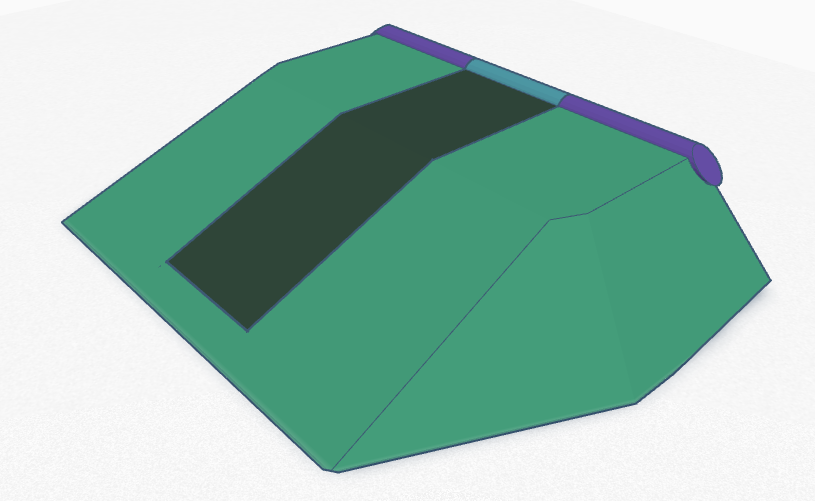 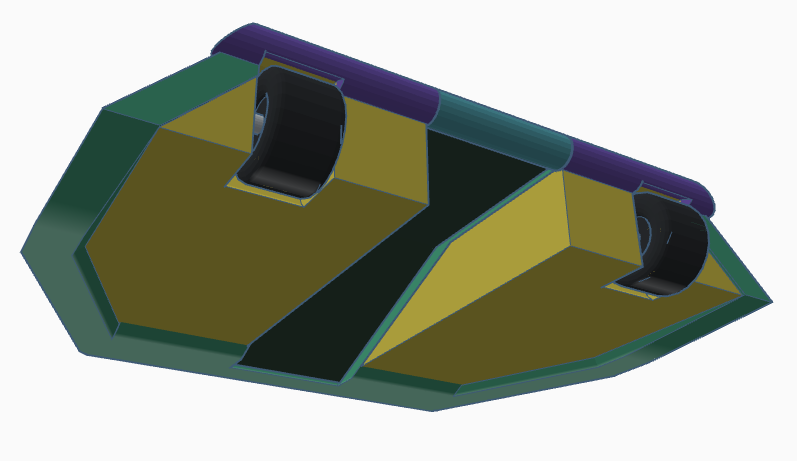 This one's sort of an iteration on Juicemaster, a robot you probably don't remember because Hobbywham&#33; imploded immediately after it began. It's a melty spinner that's hinged in the middle, so that when it's not spinning both sides drag on the ground and can wedge stuff. This causes a lot of friction and slows the robot down, but as it's a melty it's super fast and that just makes it more controllable. In theory. It's also invertible. 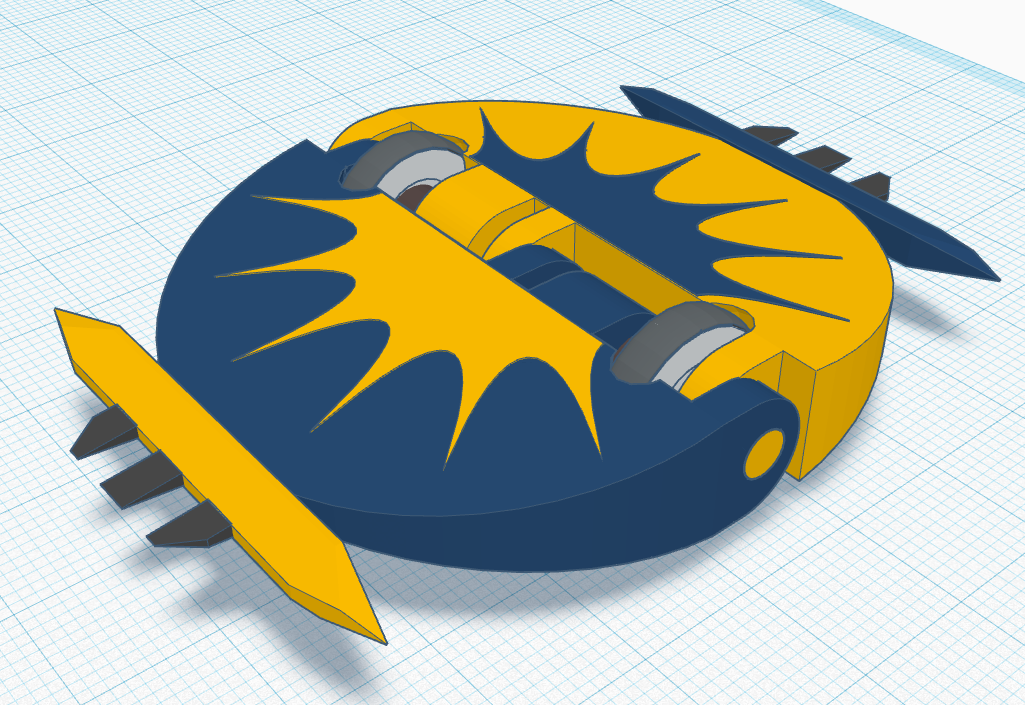 by NFX
Splashdown looks like a really neat idea. Could be quite interesting to see in action at some point.

by British-Robotics
Splashdown looks very unique&#33; One to watch out for anybody who battles against it. Loving the colourful looks of your designs :)

by attackfrog
My entries into Ruination IV: The Upheaval: 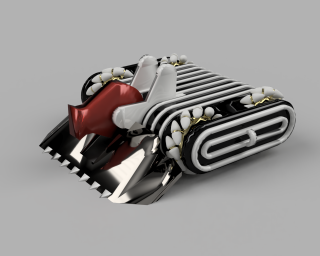 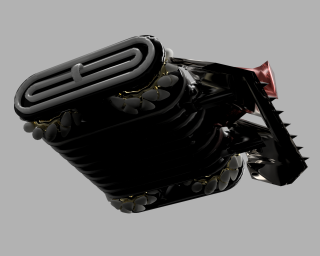 A mecanum-drive vertical spinner with style. The front plow is hinged, but won't flop far enough to get in the way of the wheels. It runs okay inverted as well, resting on those white supports behind the spinner. The spinner itself is a single-tooth design. 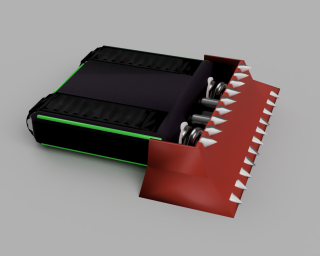 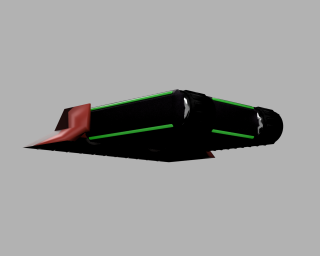 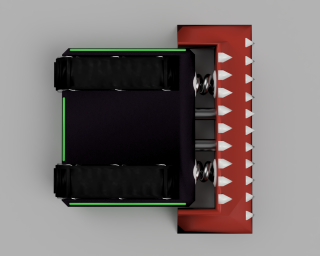 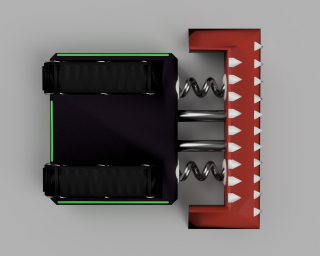 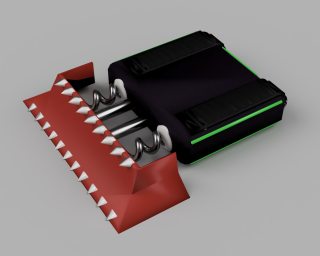 It's evil, it's hungry, and it doesn't need eyes to find and devour your robot's eternal soul. It's got tracks and a spring-powered horizontal ramming plow with lots of sharp teeth. The plow is effectively hinged: the two pistons, which retract it after firing, have some slack to move up and down. It obviously can't self-right but the teeth on top of the plow can get underneath things just as well as the ones on the bottom. 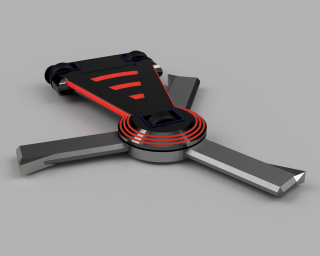 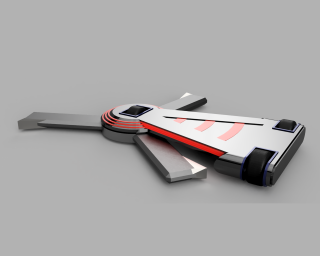 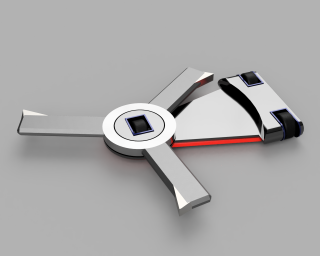 A horizontal spinner, but sideways&#33; The three-bar weapon spins on a ring around a third wheel. This design should avoid some of the problems of traditional Tombclones, such as being difficult to turn and being spun sideways by the torque reaction from spinning up. It even runs just as well upside down. 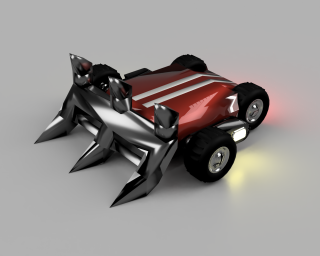 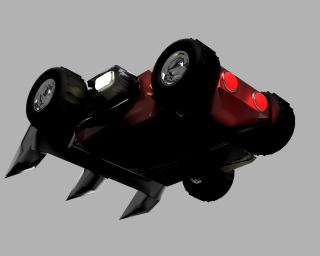 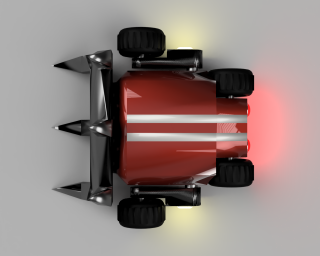 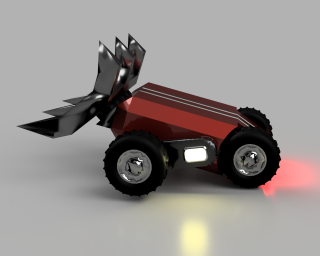 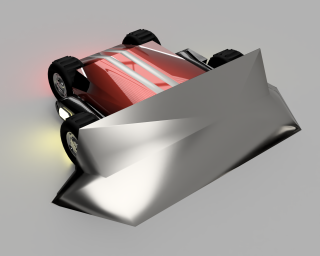 A 4WD lifter with racing stripes for +1 speed. Instead of lifting the plow on an arm, it has its front wheels on arms which rotate downwards to lift the entire body up (check the top-down picture for a better idea of the pivot point.) The wheel-arms can rotate 360 degrees to self-right the robot if it gets flipped (although in practice this might also require some torque from the drivetrain.) It has two configurations: a three-pronged fork and a wide plow, both of which are shock-mounted to the chassis.

by attackfrog
For historical purposes (and so those who haven't seen it on reddit may do so,) here's my entry into REDDIT:

Its mecanum wheels let it strafe in any direction, allowing it to accurately target unprotected parts of its opponent, get underneath them, and send them flying. The flipper is hinged at the rear of the robot, allowing the front of the robot to brace against the floor when the flipper is fired and give Super Swordfish the leverage any flipper needs.

It's got different attachments for different opponents, all of which are reinforced and made extra-durable with a +1 armor bonus: The fin at the top of the robot should aid in self-righting should Super Swordfish be flipped, and the tail is purely decorative and made out of soft foam. The eyes contain portals into the dark unknowable abyss that lies at the bottom of the briny deep.

by attackfrog
I took the opportunity to design something totally impractical for regular robot combat and entered this wacky thing in RoBattle&#33; 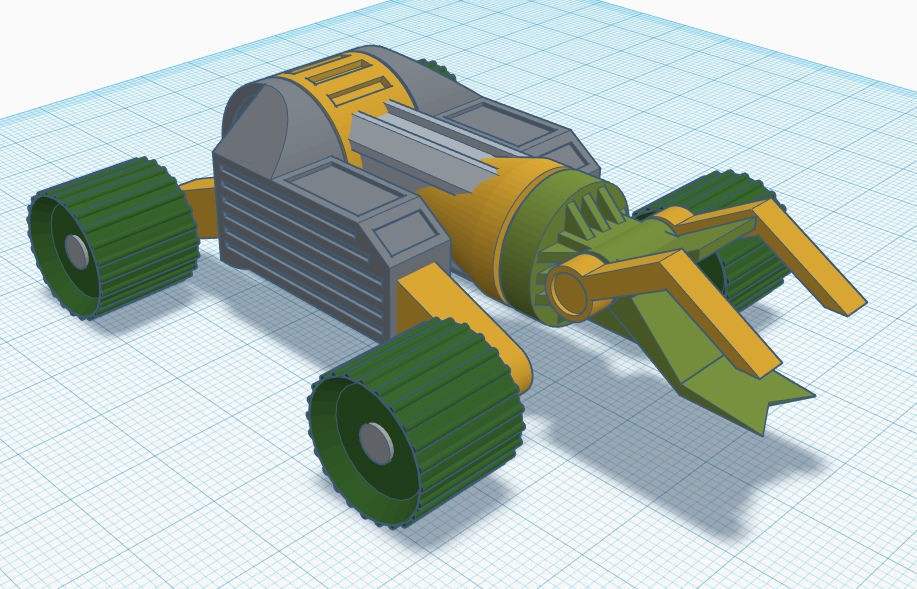 Ground clearance? Hercules has got it. A rotating lifter/grabber? Got that too. A resemblance to a giant beetle? Apparently so&#33;
The weapon has three actuation points: the arm lifts and lowers 360 degrees around the Y axis of the robot, the clamping head rotates 360 degrees along the X axis of the robot, and the yellow parts of the jaws/clamps/mandibles raise and lower (not 360 degrees, obviously.) Essentially, it can grab, lift, and twist.
The wheels are made out of a squishy but resilient foam. (They've still got 8 armor though so pls no slice)

by attackfrog
Another entry to RoBattle. This one's a lot lower effort, as you can probably see. This concept might have some potential though. (I guess the 2-axis lifter/grabber idea from Hercules theoretically could too, in a robot with a lower center of gravity and more armor.) 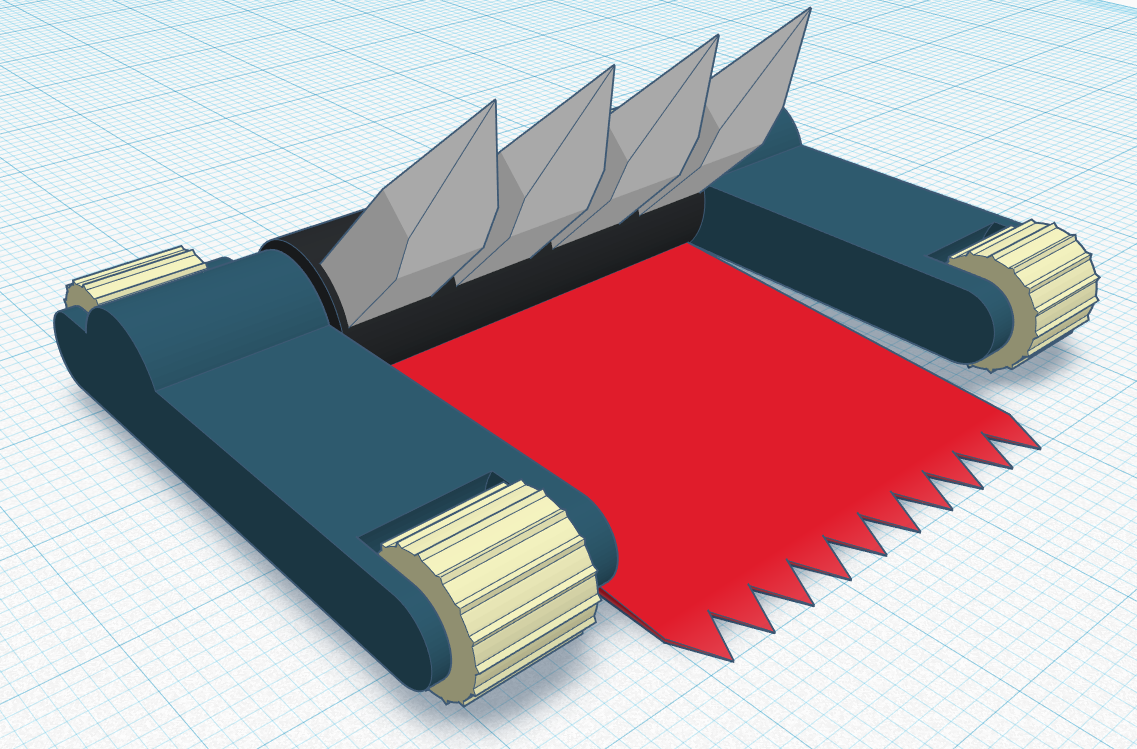 It's The Maw's little cousin. A 360 dustpan lifter with optional front wheelguards (see album.) The two drive pods are linked together and don't move independently (as with Razorback in Battlebots.)
As for the water challenge... I waterproofed the electronics? :V

by NFX
>foam wheels
>8 armour
yeah that sounds about right

Certainly an intriguing concept, though, and I think the sort of thing that could really perform well in RoBattle. Provided it doesn't fall over.

by Sylandrophol
the gourmet's image leads to hercules' image :v

by attackfrog
I don't know how that happened, and I can't find the original album in my browser history. What the heck?

I uploaded it again here: https://imgur.com/a/0gjkKvU

Sketchfab is a pretty awesome service&#33; Check out the "3D Preview" links to see what I mean. 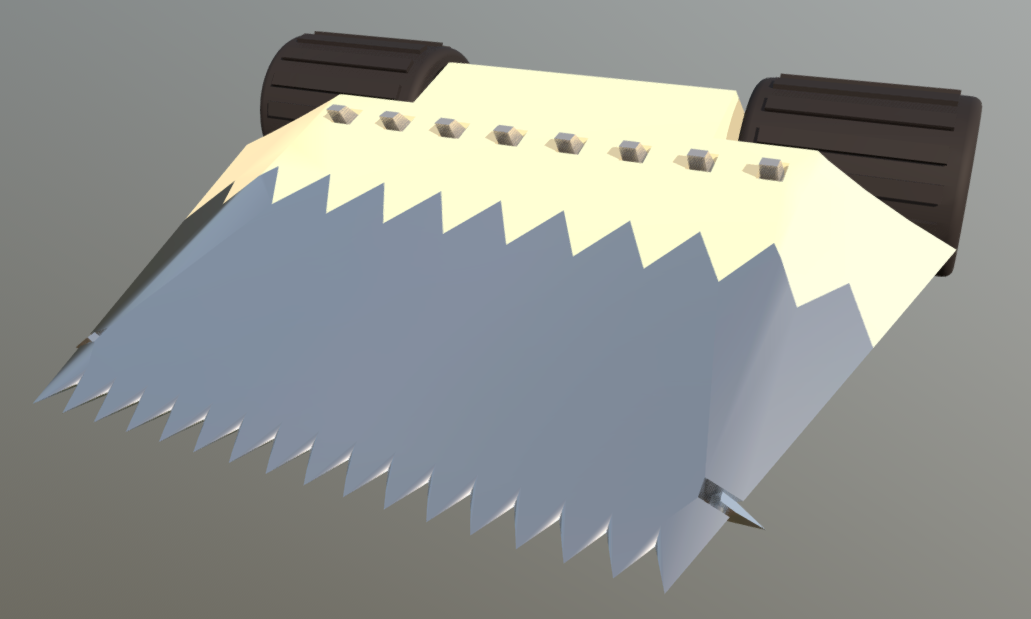 A 2WD wedge. How fun. It's got little hinged wedgelets to the side of the main wedge for even more wedging. A gravity-powered mechanism retracts the "comb" spikes on top when the robot is flipped over, and extends an identical set on the other side. <small><small>Floor seams here I come&#33;</small></small> 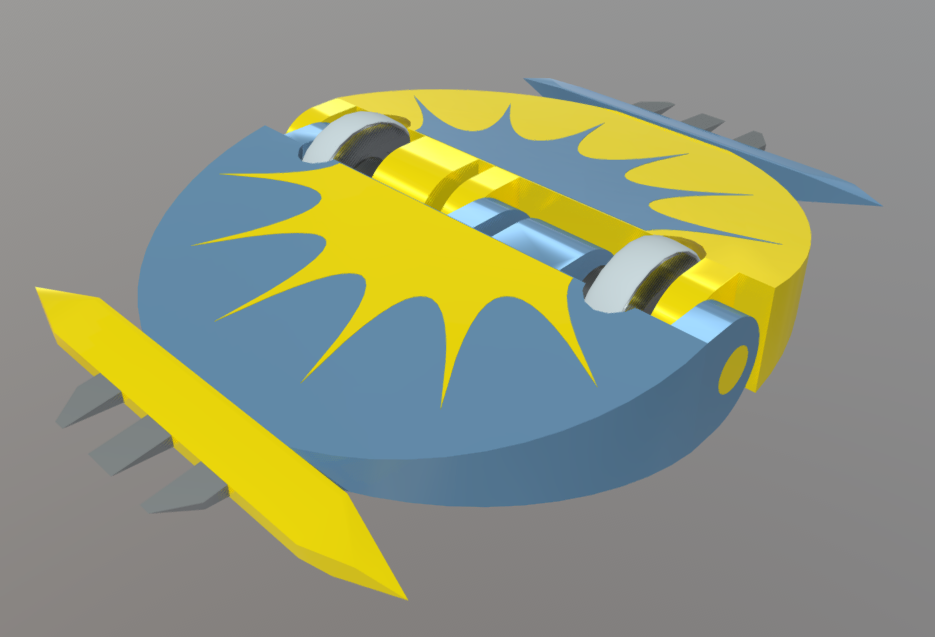 A melty-brain spinner that's hinged in the middle. When it's spinning, the two halves come up off the ground due to <del>centrifugal force</del> inertia; when it's not spinning they rest on the ground and let Splashdown act as a double-sided wedge bot. It's probably going to do terribly but I like the CAD. 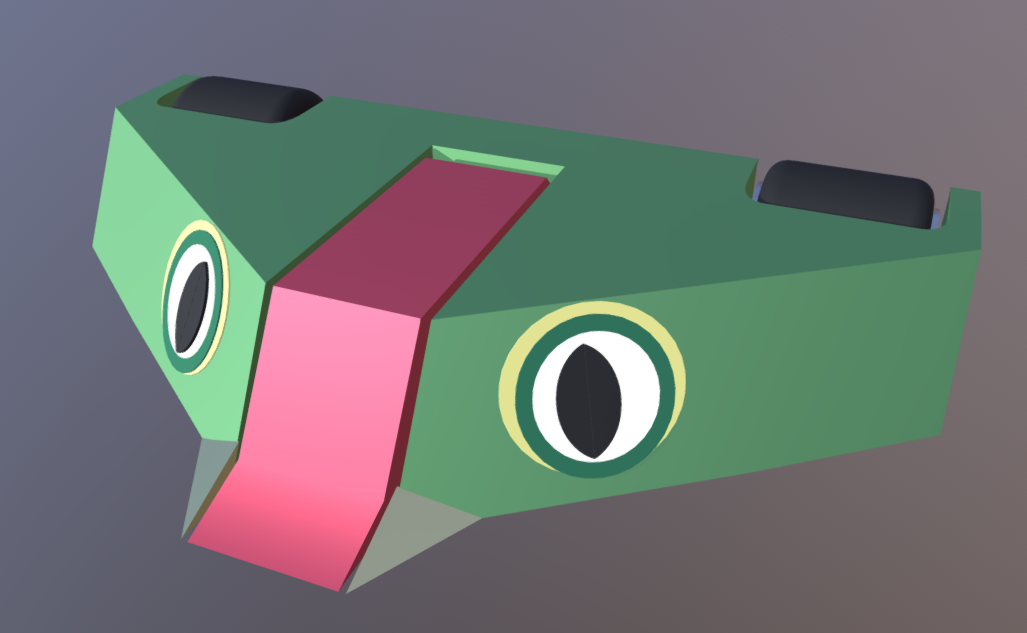 Look who's back again&#33; No, I don't mean Tantrum, that's Frogbot&#33; Don't you recognize the little fella? It's 2WD this time, but it's still got a pneumatic rear-hinged flipper and googly eyes.

A dumb name for a dumb robot. Or is it? It's got two flails, which can be retracted into the housing on top of the robot (they can also extend about a foot farther than pictured.) The 4WD chassis has a shock-mounted armor plate at one end and wedgelets on the other. If you flip it, it will spin its chassis at you in anger as it gets counted out, so please don't.