Rest of the bot looks nice though.

by V900
hey gamers, guess who hasn't updated his showcase since february :headache: Waluigi may not be in Ultimate Smash Bros vs Capcom 3, but that won't stop him from appearing in ROBOTS. You know Black Dog? That annoying drum that specializes in screwing over plow-stackers? Near-identical stats, but the damage from this thing is even harder to avoid. The weapon bars can either flail in a limited arc (limited enough so that they don't smack each other, that is) or be locked in place.
Speed: 6
Torque: 1
Traction: 4
Armor: 5
Weapon: 14[/quote]

by attackfrog
So you're basically attacking with wet noodles? :V Spiritual successor to Long Arm of the Law, which in itself was a spiritual successor to Sword of Justice. Funny how that works out, innit? Like the previous 2 bots, this has a big piston that pushes bots away. The difference here is that I'm not trying to damage with it like some sorta moron.

Yes, the wheels shoot sparks out of them on command.

NO MANUAL GIVEN FOR HAN-D MODEL

Hammer and piston/punchers can fire separately. The puncher isn't very good at dealing damage, but can disrupt spinners and use it's obscene girth (SHW limit is 340lbs, 680 for walkers) to walk up slowly and downsmash. He's a big guy. 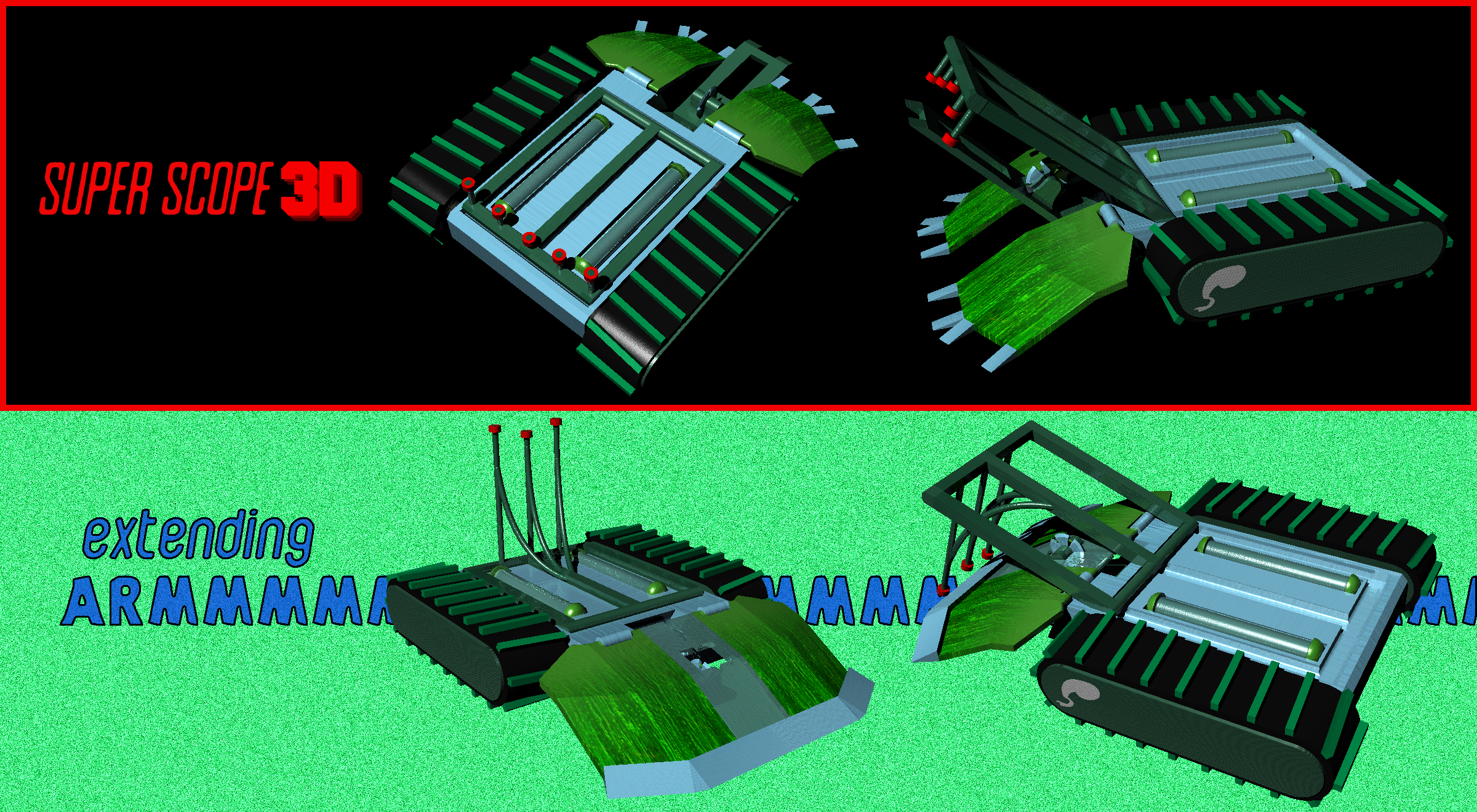 Did you know? Kappas are said to steal souls (or "shirikodama") by reaching into the victim's anus and painfully yanking it out of the orfice. That's essentially the main goal of this bot. Enjoy your impromptu prostate exam.

It also has big tubes on the top and bottom containing approximately a gallon of cucumber juice each. Front wedges are hinged. 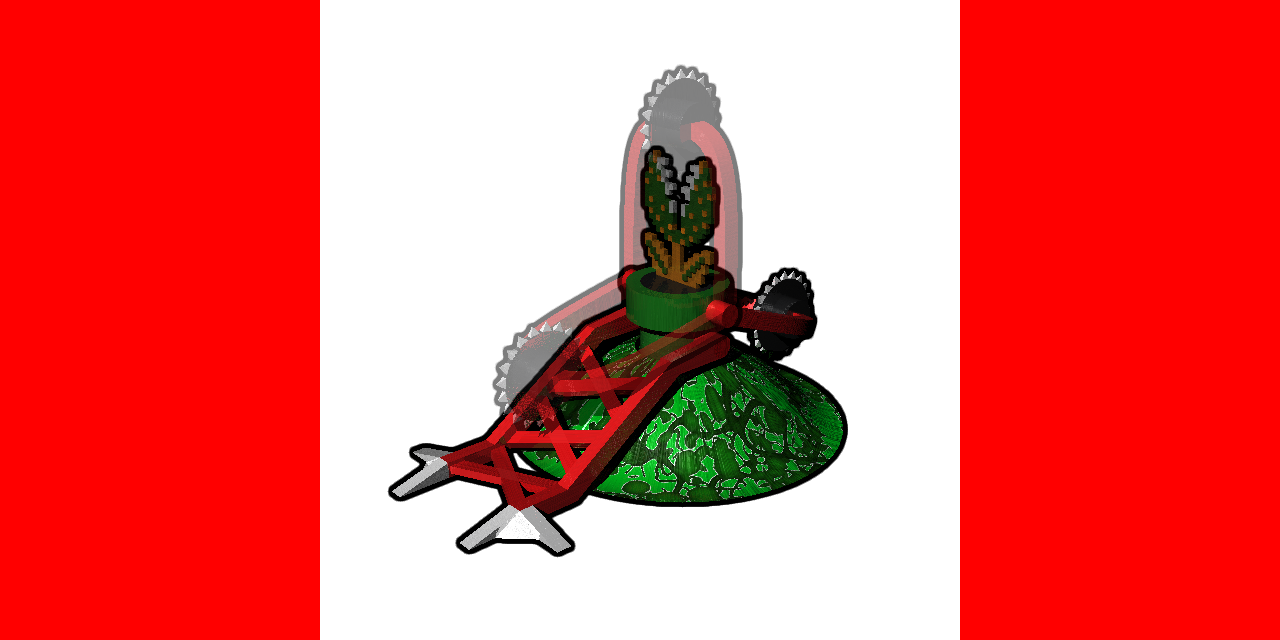 They could have chosen anything, anything. But they chose a fucking leaf.

Just like in every Mario game ever, you'll be hard pressed to defeat this thing with standard attacks. Every inch of it is covered in 13 armor, and the 5-speed turret has even more at 15. Though, the clamping arms leave some openings near the top of the bot. Maybe you could sneak some flames in there...

Oh yeah, here's also a slithering system I made in 5 minutes.

by attackfrog
Your robots are as weird as ever :V 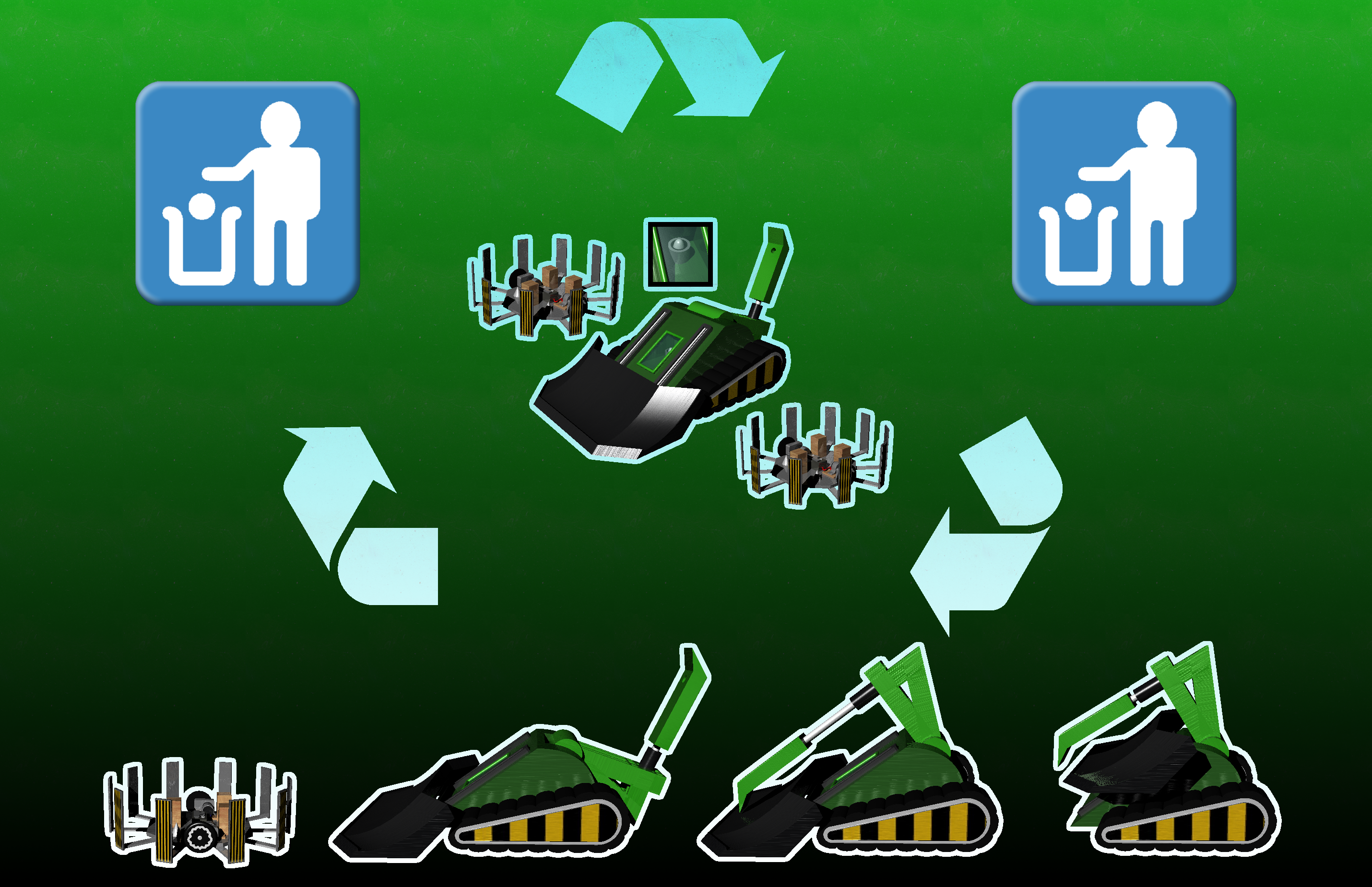 AND THEN I START EATING GARBAGE

You know how most lifters are these low-to-the-ground, sleek little shits that look more akin to Roombas than combat robots? Forklifts don't really lend themselves well to being short. It's got a plow in the front to both act as a lifter and defend against spinners, and an obnoxious overhead device to keep robots in place or scoop them off the plow. The forklift can push said plow into the ground to act similar to a regular lifter.

The trash cans (constructed out of wood and soda can aluminum) can be used to high-center bricks and disorient spinners. Weight distribution is split 90/5/5, that hole in the forklift's top arm spews fire.

There is an egg located inside the bot's front. Please do not disturb it.