Looks like I'm one of the few people who hasn't made some sort of showcase thread here yet. Here it is.

I'm a bit of a mad scientist when it comes to robot designs. Nearly everything I make will probably be unconventional, and half of it might not work as intended. I'm gonna post it regardless. Feel free to criticize, ask questions, give advice, beat the crap out of me for my dumb designs, etc.

Limiting myself to 2 bots per update because I have a huge backlog of ideas and I'd rather not flood the thread with all of them at once. Let's get started.

First, a fairly recent experimental design I currently have filed under the name Broken Record. HW 4WD ring spinner... with a twist. The name will probably change. I don't like it much. 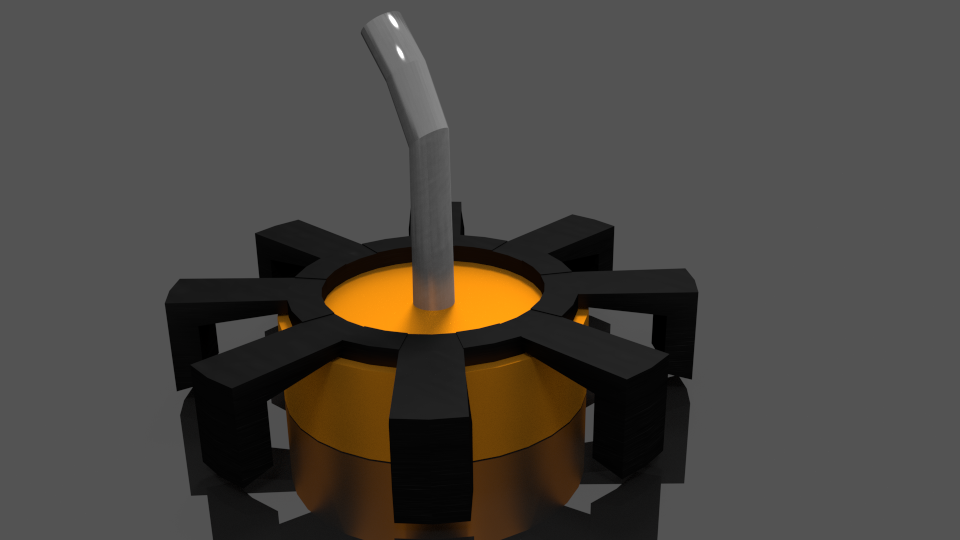 At first glance it looks like an overbuilt ring spinner. Because, well... it is exactly that. The ring is spun using a friction system like IRL bot Swirlee used. The spinning weapon is unique in that its primary purpose is as armor. So, let's say this thing ends up fighting a horizontal bar spinner. By not spinning up, the arms coming out of the ring should be able to take a hit from the spinning bar and spin freely, gaining speed while the spinning bar loses speed from the impact. The speed the ring picks up from taking hits can then be turned against the spinning bar bot. Because the armor is able to spin around the robot ("roll with the punches" as one might say), the knockback and damage received from the hit should be minimized. The ability to spin up the armor/weapon manually is for damaging weaponless bots and/or using the top post to (unreliably) self-right.

Yes, I'm aware the weapon stat is low considering what this thing is, but the "weapon" is going to be taking a lot of hits for the bot so I feel like I have to prioritize armor. I'm considering allocating more points to torque, but this bot probably won't be doing a lot of pushing.


Next, a more conventional design I just finished a few hours ago: Blackfoot. MW tracked rear-hinged flipper, sturdy and nasty and stuff. Named for the black-footed ferret for no particular reason. 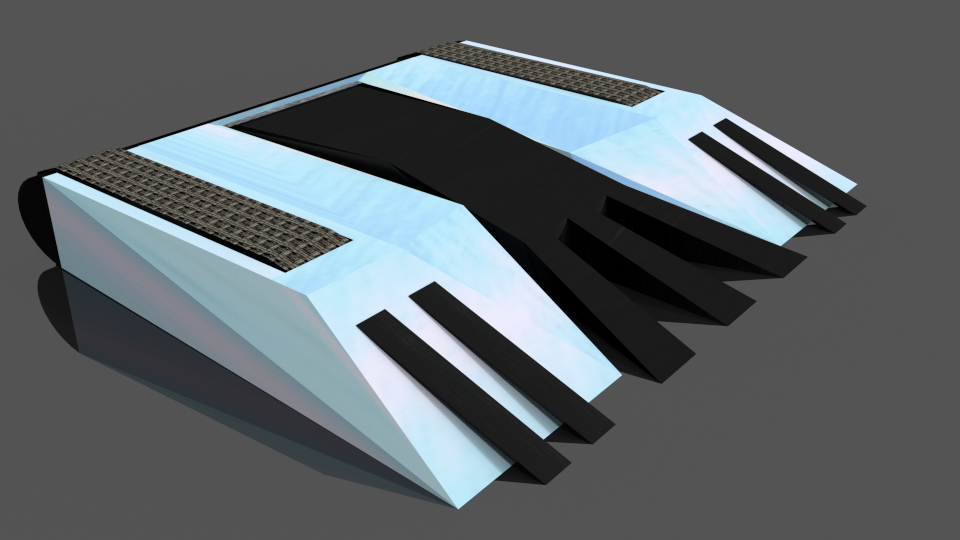 About the mess on the front: so, I know I'm one of the new guys so I'm not expected to know about some of the older bots around here. I took care of that and read through the ARC Hall of Fame and every sign-up thread I could find. I couldn't help but notice a bot called Underall getting a lot of attention for, well... getting under everyone else. After some digging to find the reason it was so good at this, I came to the conclusion that it had something to do with the segmented design of the front wedge. I went ahead and put the thin hinged wedges on the front of Blackfoot and forked the flipping arm to try to replicate this.

The picture doesn't show it well, but the bottom front corners are flared out a bit so the sides aren't perfectly flat.

Since I would ideally be under my opponents, I don't feel like torque is particularly important for this bot. All the points I would have put into torque went to armor instead to allow Blackfoot to take some hits. Everything else is around average.


Thoughts? Questions? Sudden urges to beat me over the head for how weird Broken Record is?
Last edited by Cha0sFerret on Sat Sep 12, 2015 11:37 am, edited 1 time in total.
poopity scoop
Top

Decent two designs, I really like it a a lot :). Blackfoot has potential
Top

Broken Record does look like a pretty unique design, but as with Badnik, I'm not entirely sure it'd perform all that well in battle. Colour scheme seems to remind me of the Half-Life franchise for some reason, so maybe there's a name/character for the bot to be found there.

Blackfoot, on the other hand, is definitely one of the best "first tries" from a newcomer I've seen in a while. Obviously going back and looking at what has worked in the past has helped here, and it should be a very solid design. What you might want to think about is a flipping arm with no gaps in the wedge, in case you're fighting a powerful horizontal spinner. The gaps would give them something to catch on an attack, you do see a fair few designs around with anti-spinner attachments or weaponry, to give them better coverage.

All in all, though, it's a very good first impression. The stats look very solid for the pair of them as well, so you definitely know what you're doing at the moment. Here's hoping you stick around, you could definitely go far in CFL. =)
Last edited by NFX on Sat Sep 12, 2015 7:56 am, edited 1 time in total.
Team Mongoose (358-215)
"The Colour of Awesome"
Braveheart / Crash Blossom / Depth Charge / Broken Ghost / Murder Death Unit / Agent X

Love the look of Blackfoot, I have to say. Well done. :D

Though I don't know if it's just me, but Broken Record reminds me of a spider with all those legs on it. :P
ICE³ ROBOTICS
"Tougher than a glacier, more might than an avalanche, more fury than a blizzard, and more burning passion than a volcano."
Top

Wow, I wasn't expecting this much positivity. You guys are pretty nice. I like you :)

<blockquote class='quote_blockquote'><dl><dt>NFX</dt><dd>&nbsp;</dd></dl><div>What you might want to think about is a flipping arm with no gaps in the wedge, in case you're fighting a powerful horizontal spinner. The gaps would give them something to catch on an attack, you do see a fair few designs around with anti-spinner attachments or weaponry, to give them better coverage.[/quote]
I didn't even think about that. I'm probably gonna make a separate, more solid flipping arm to use against spinners. As long as we're on the topic of spinner matchups, would it be wise to ditch the hinged skirts against spinners as well?

<blockquote class='quote_blockquote'><dl><dt>GF93</dt><dd>&nbsp;</dd></dl><div>Though I don't know if it's just me, but Broken Record reminds me of a spider with all those legs on it. :P[/quote]
I actually wanted to name it after a spider, but orange spiders with catchy names seem a bit rare.
poopity scoop
Top

<blockquote class='quote_blockquote'><dl><dt>Cha0sFerret</dt><dd>Sep 12 2015, 11:59 AM</dd></dl><div><blockquote class='quote_blockquote'><dl><dt>NFX</dt><dd>&nbsp;</dd></dl><div>What you might want to think about is a flipping arm with no gaps in the wedge, in case you're fighting a powerful horizontal spinner. The gaps would give them something to catch on an attack, you do see a fair few designs around with anti-spinner attachments or weaponry, to give them better coverage.[/quote]
I didn't even think about that. I'm probably gonna make a separate, more solid flipping arm to use against spinners. As long as we're on the topic of spinner matchups, would it be wise to ditch the hinged skirts against spinners as well?[/quote]I think it would help in this case, yeah. They're quite narrow themselves, and they would probably give spinners more of a chance to catch the edge and cause damage, rather than giving you more of a chance to get underneath them. That's what you'd need to weigh up, but it varies from bot to bot.
Team Mongoose (358-215)
"The Colour of Awesome"
Braveheart / Crash Blossom / Depth Charge / Broken Ghost / Murder Death Unit / Agent X

I like the name of Broken record, tbh. We're both newbies, but you keep making me look bad, what with the good designs and better CAD :P /joke. I do like Blackfoot a lot.
‽ ROBOTICS
CHAMPIONS: Lightweight//Ruination 4//Nick's Fuzzy Rules -- -- Hobbyweight//Bot-o-Rama//Buzzkill

Blackfoot now has an anti-spinner configuration based on NFX's advice. 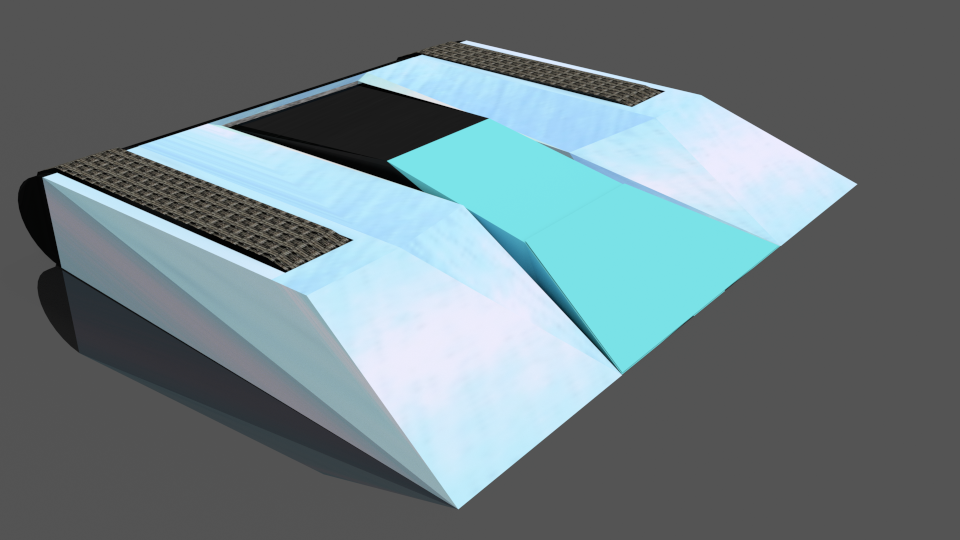 I made a second flipping arm to attach before the fight. It is solid and the lower part of the wedge is thicker so the arm can take hits better. The thin hinged skirts are removed in this configuration so spinners won't catch on them.


Also, introducing a design a made before I understood how to light my scenes properly: Great White. HW 4WD shell spinner/wedge hybrid, named because I think it looks like a shark. 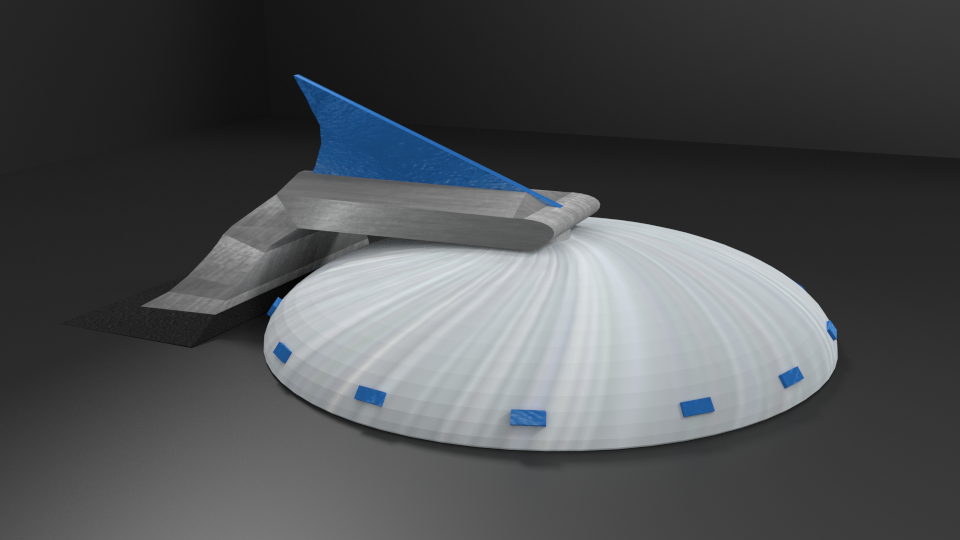 My attempt at a spinner than has an advantage against all other spinners The wheels are under the spinning shell. The wedge is attached the way a self-righting pole would be on a more normal shell spinner. The fin on top acts as an anti-monstertrucking spike for the wedge.

I just realized I make a lot of heavyweights.
poopity scoop
Top

I used to be on that too many heavyweights boat, until I realized what I was doing... now I have too many MWs :P

about shark; can your fin still help you self-right? I like the look, but the spinner might have trouble inflicting damage, as Badnik suggested
‽ ROBOTICS
CHAMPIONS: Lightweight//Ruination 4//Nick's Fuzzy Rules -- -- Hobbyweight//Bot-o-Rama//Buzzkill

Nice design. Get some gnarly-ass teeth on it.
Top

Blackfoot kind of reminds me of my bot The Arbiter, but with treads. Looks cool.

Alright, I'm gonna see about getting some bigger teeth for Great White and re-rendering it with proper lighting. I'll get back to you all with that when it's done. Also, Angry_Goat: the fin on top could be used to self-right... if the wedge wasn't there. For now, the plan with Great White is to not get flipped.

In other news, I have some new designs to show off. 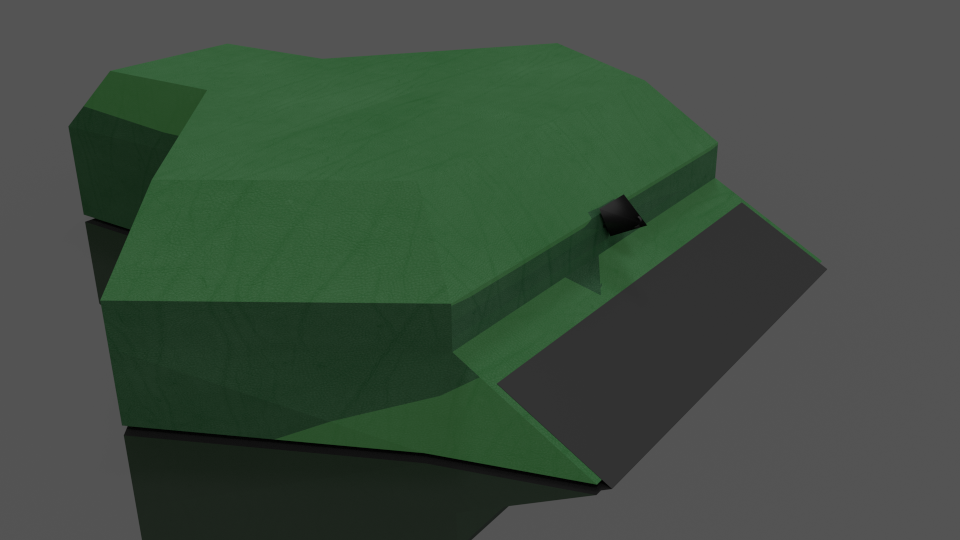 So here's a weird bot. The shape is to accommodate the spear and the 3 wheel Kiwi drive setup. Normally I avoid omni-directional drive systems because they tend to have poor traction, but for a projectile bot that is ideally far away from its opponent traction isn't as needed as usual because it doesn't need to turn as much to line up its weapon. Plus, being able to strafe with a projectile weapon is a tactical advantage. The spear is tethered at the very back and fired using a spring. The spear is reeled in with a winch, and a notch on the side of the spear shaft re-compresses the spring. The spearhead has small barbs on the sides so that if the spear punctures an opponent's armor, retracting the spear will cause further tearing.

Kiwi Cannon doesn't need to turn very quickly so I've basically dumped traction out. It needs high speed and decent torque to retreat from oncoming weaponry. A high weapon stat is needed to pierce the moderate armor of offensively-oriented bots. Leftover points were thrown into armor to avoid getting OHKO'd by hazards.


Now a LW: Fatal Error 2. What happened to Fatal Error 1? Well... Blender crashed while I was making it, hence the Fatal Error name. Then the .blend file was corrupted before I could render the scene and Fatal Error met an early retirement. Fatal Error 2 is here to represent its younger brother who never saw the light of day. (I should probably add that the 2 is just a joke based on the crap that happened while it was being created) 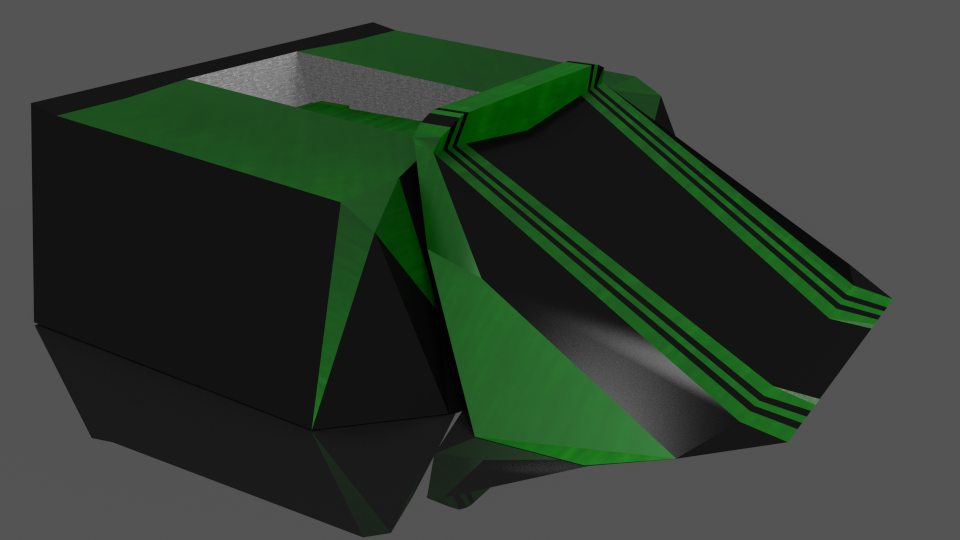 What we have here is a 2WD 4-bar flipper, specifically designed to remove opponents from the arena. Basically a LW Ziggy with 2 wheels. The wheels are slightly behind the center of mass so the flipper is always tilted into the ground. The flipper can be used to self-right as well.