Get your creative juices flowing and submit your own media, art, ariticles, or whatever you think people will find at least mildly entertaining to this site. We promote intelligence.
Post Reply
905 posts

personally im not a huge fan of the scythes but it looks sweet regardless.

Welcome back to the world of the living

Hope I'm not too late to the bandwagon guys. 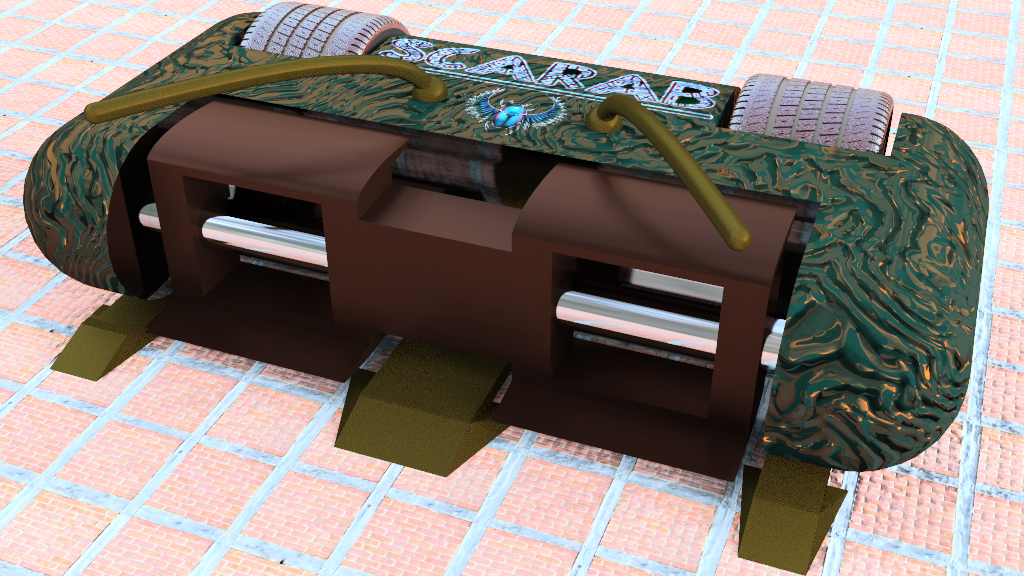 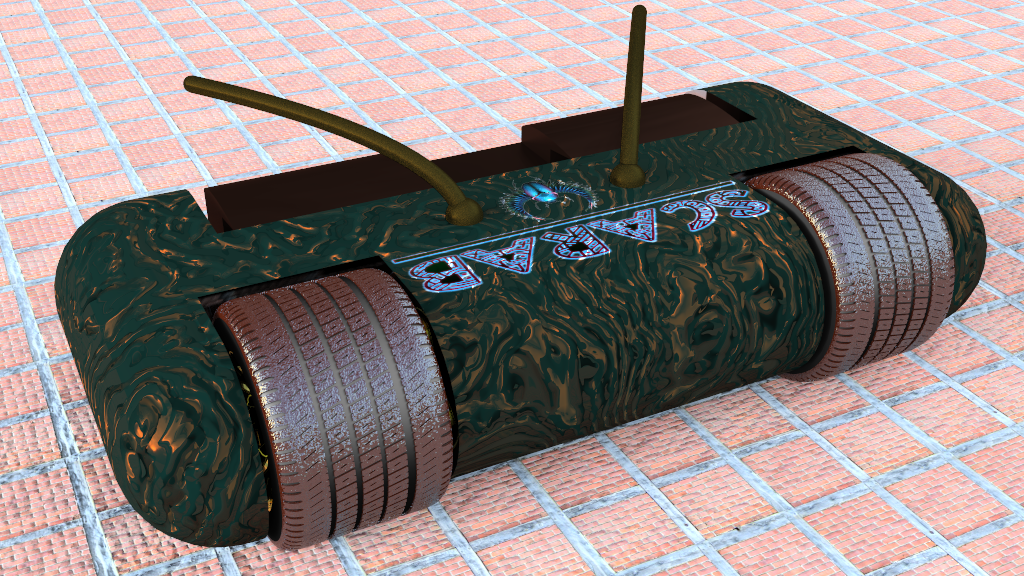 Yeah I turned it into a Black Dog clone... except I looked very closely at the Black Dog CAD and addressed some... issues. :P

First, Scarab's returned to the beater. Less shit for you HSes to catch onto.

The wedge tips themselves I can remove, but not the bar supports. They're there to stay, though the beater reaches out further than the bars when the wedges aren't on, so suck it, undercutters.

No, the beater won't catch the wedges. You can argue that all you want in your RPs, but it's not happening. :P

Oh, and look at this: 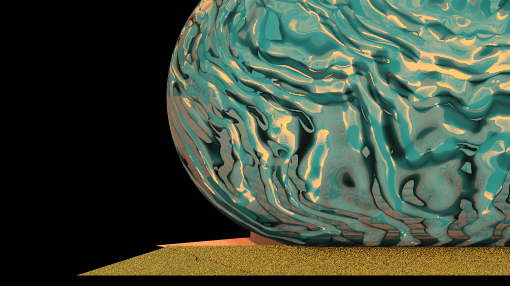 Yeah, the wedge tips are steep enough where I can actually get the edges of your own wedges&#33; You're not safe&#33;

And it can run upside-down. The antennae are not actually decoration, but solid and keep the drum from hitting the ground. They don't bend, but I guess they can break off if something hits them hard enough.

Weak as shit to axes, but this isn't meant to be an axe killer. Will be nice if I can get a few axebot kills with it though.
This account is in a state of dimensional flux
Top 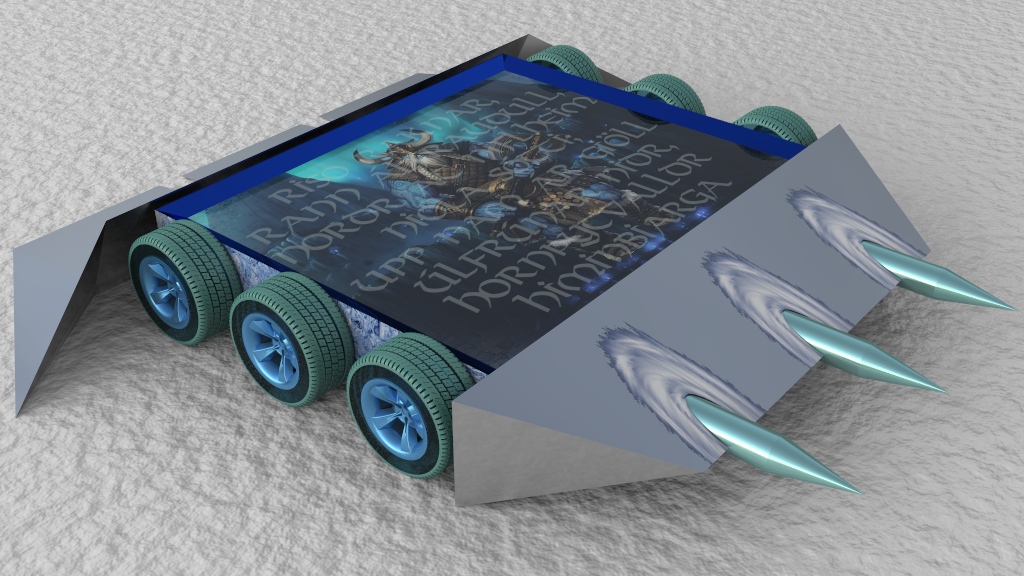 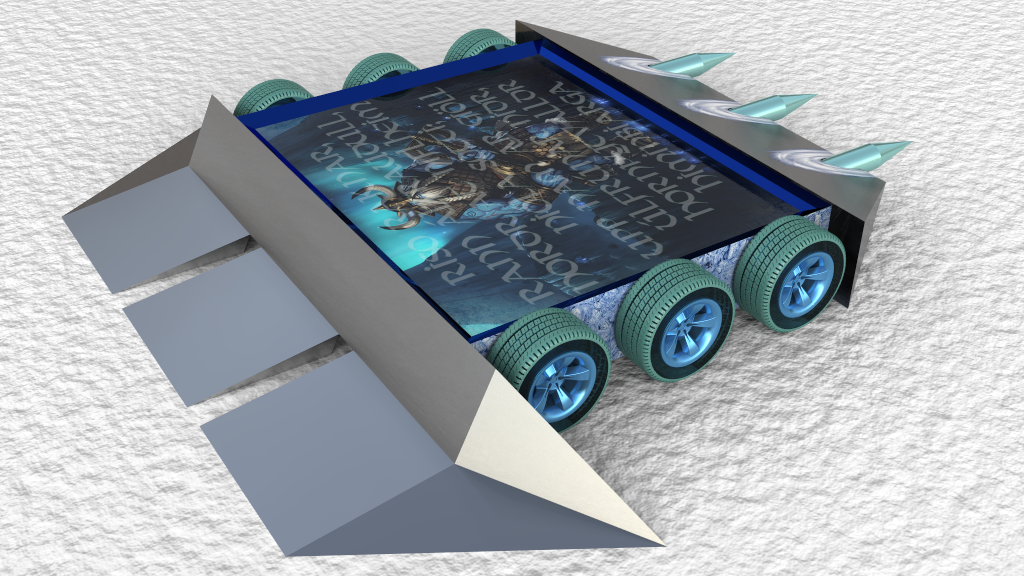 Not sure what weight class this will be, but it might be a Hobbyweight should some competition for those crop up again.

6WD iceberg of a brick. Has rotating spike rack for either ramming into stuff with the spikes, or lifting up things. Plow at the rear is hinged. Completely invertible, except for the plow obviously. Named after the realm of ice and cold in Norse mythology.

Also doubles as another Senran Kagura reference because it is one of Yomi's attacks.

This account is in a state of dimensional flux
Top 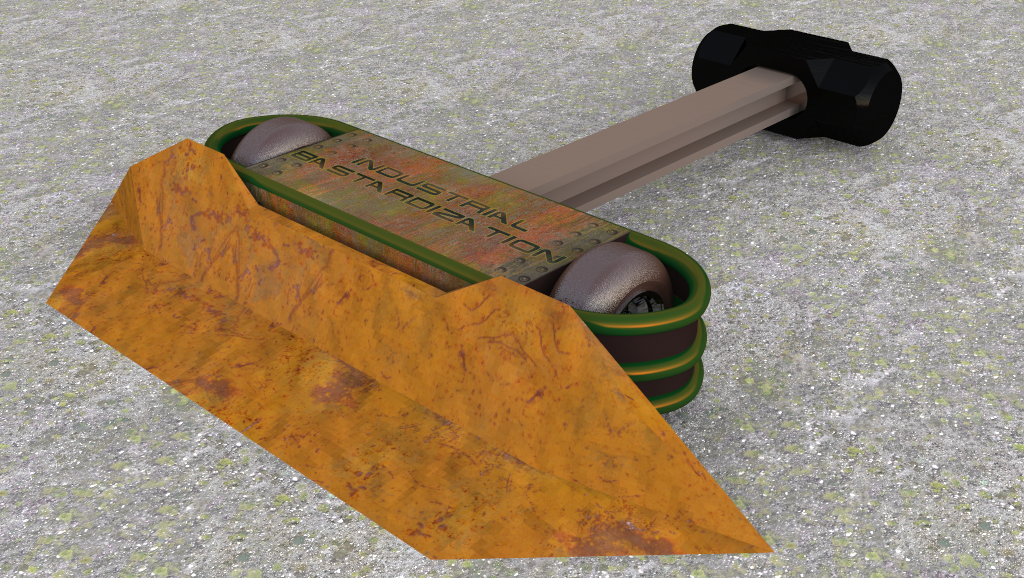 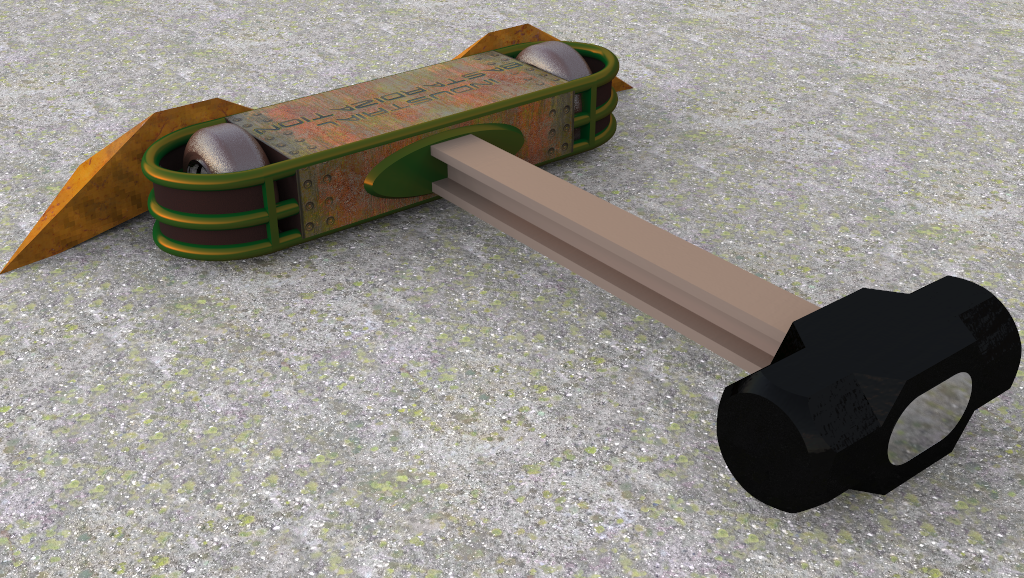 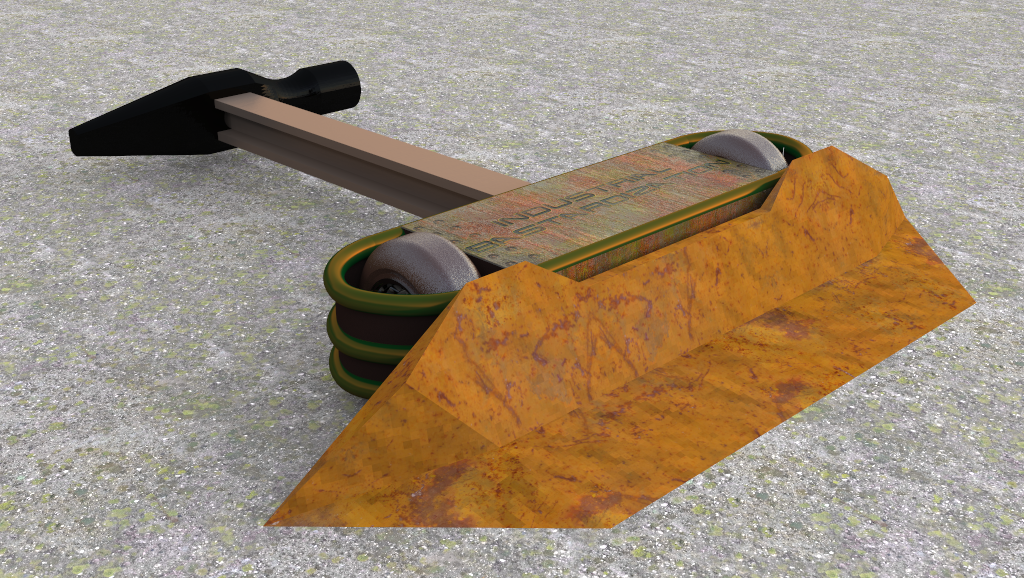 Has a rusty ABR plow, hinged and limited to 20 degrees each way. Doesn't work inverted but the bot does. Hey, that's life in the industry. You work with what you've got.

Now has two hammer varities. A pointy one and a sledge one, both variants of industrial hammers. Thanks to NFX for crafting the sledge variant.
This account is in a state of dimensional flux
Top

You think I would stop with Hikage and Shiki? Guess again. 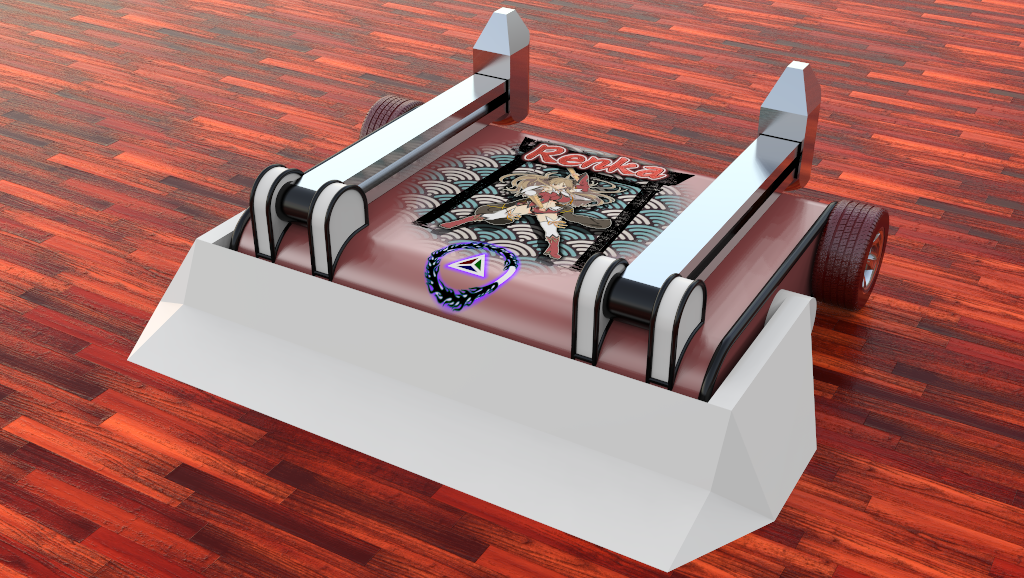 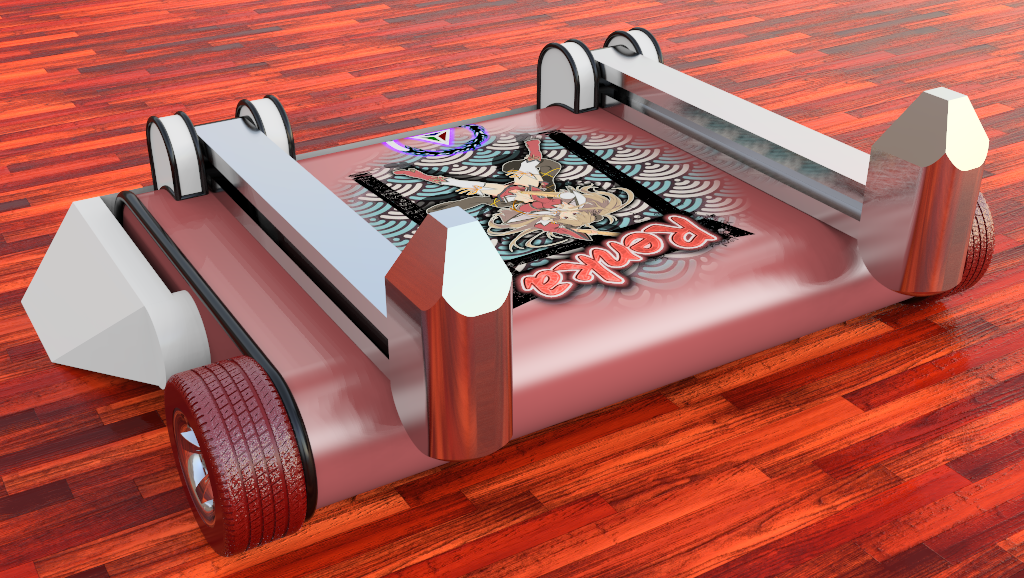 Oh yeah, you know what she's all about. :tellu:

And for matches where Renka can simply strut her stuff... 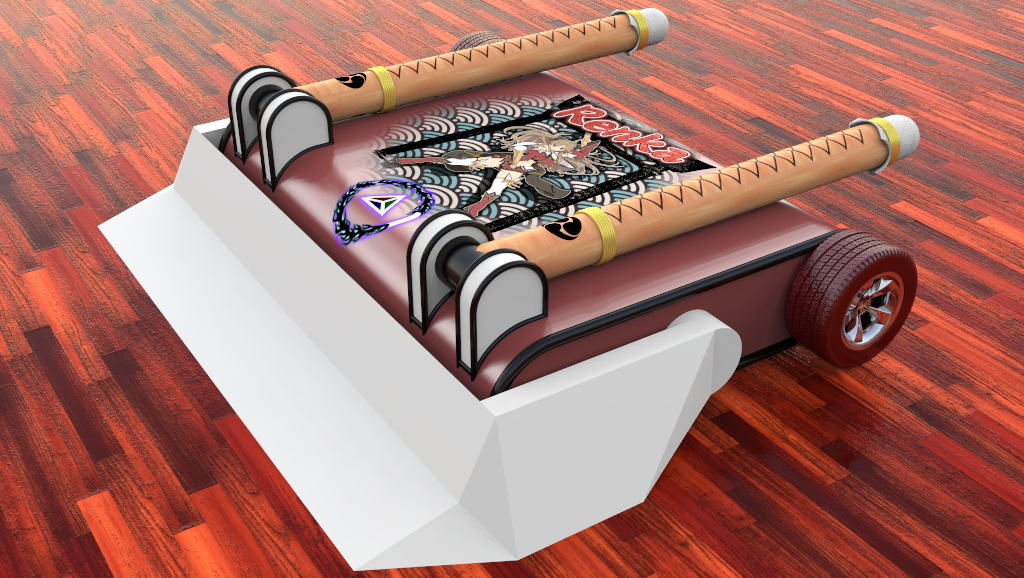 I went through the pain of re-making actual Renka's reitei weaponry as joke hammers.

2WD. Hinged plow on a limiter, can be locked down if need be to act as a static wedge. Double hammers, not on the same axle (obviously), but powered by the same system. Can self-right. Also sports the "new" team logo.

Planned as my lightweight for Ruination: The Upheaval.

Dance in the festival of midsummer&#33;
This account is in a state of dimensional flux
Top

IB looks like a tough git once again. Wheelguards seem a bit needless, but I suppose people won't be getting to them much.

Renka seems like a pretty good design there. Overhead spinners might be troubling, given the hammer mounts, and I'm not sure why a 2WD hinged wedge is a good idea, but it's always entertaining to see another waifubot

Renka's built like a 4wd bot but has 2wd in the back for some reason, so good luck turning well. As always though, super high quality render
‽ ROBOTICS
CHAMPIONS: Lightweight//Ruination 4//Nick's Fuzzy Rules -- -- Hobbyweight//Bot-o-Rama//Buzzkill

<blockquote class='quote_blockquote'><dl><dt>The_Angry_Goat</dt><dd>Sep 13 2017, 08:48 AM</dd></dl><div>Renka's built like a 4wd bot but has 2wd in the back for some reason, so good luck turning well. As always though, super high quality render[/quote]always intended it to be 2wd my friend
This account is in a state of dimensional flux
Top

Well, how about that&#33; I like the use of the reitei sticks as joke weapons, and it certainly looks like an interesting design; almost like what you'd get if Hellhound and Klarinette got together and had hammer/brick/weeb babies. :P
ICE³ ROBOTICS
"Tougher than a glacier, more might than an avalanche, more fury than a blizzard, and more burning passion than a volcano."
Top

Question about Industrial Bastardization. Love the look of it, but if it has 2WD, why hinge the plow?
Alpha Robotics - Embrace the carnage!

I think to keep it on the ground, since the weight of the thwack tail would be tilting it back.
Team Mongoose (358-215)
"The Colour of Awesome"
Braveheart / Crash Blossom / Depth Charge / Broken Ghost / Murder Death Unit / Agent X

Ya if it was static it would be very hard to use
‽ ROBOTICS
CHAMPIONS: Lightweight//Ruination 4//Nick's Fuzzy Rules -- -- Hobbyweight//Bot-o-Rama//Buzzkill

Remember the only bot of mine that made it to the play-offs in Reign of Steel? 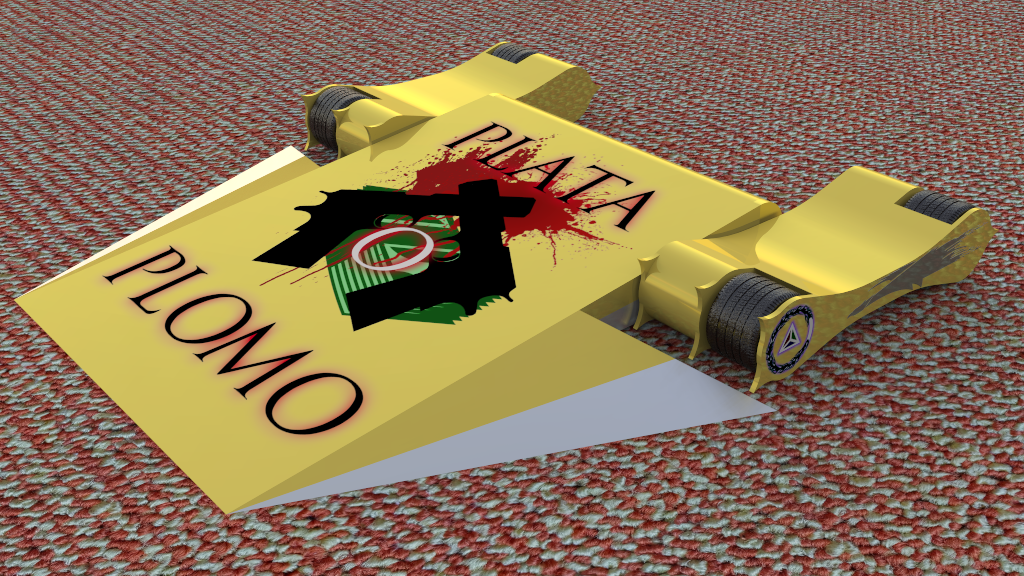 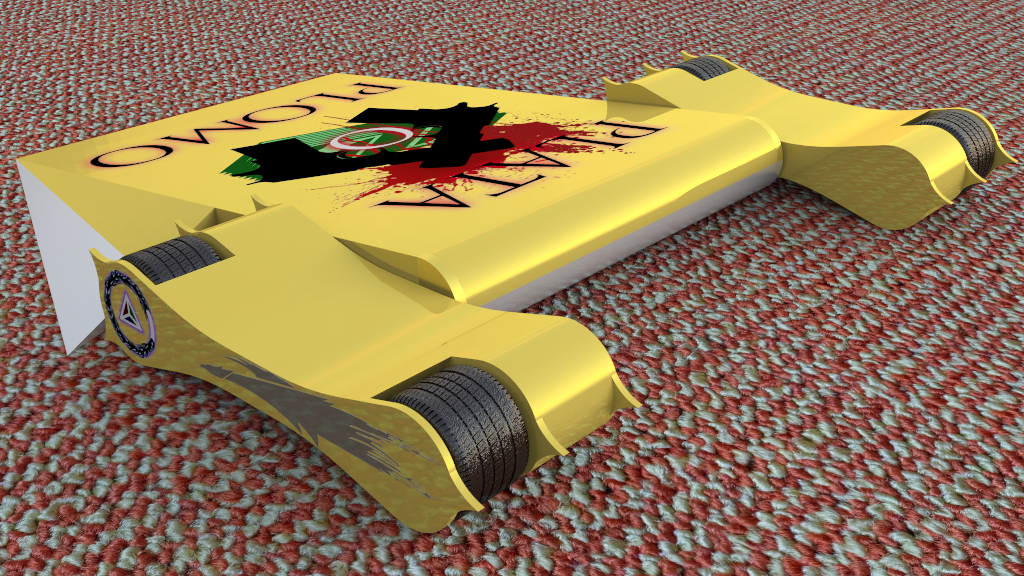 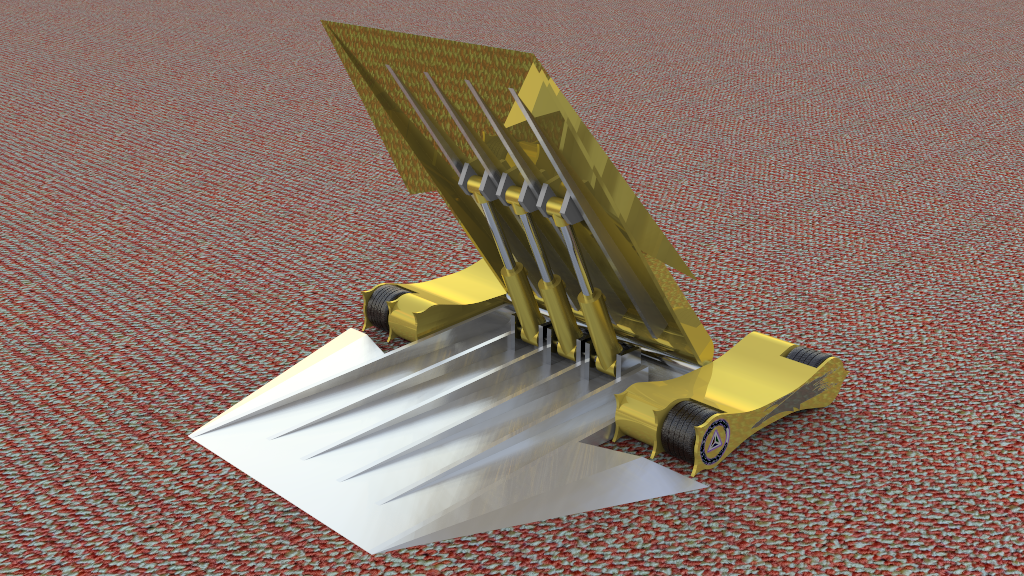 4WD, gigantic fucking flipper that's very low to the ground. Has optional spikes on the wheelpods as pictured, to prevent wider bots from scurrying over the flipper before getting tossed. Kinda weak to spinners but the design tends to lend itself to that and adding a plow kind of hurts the design.

Planned to be, and is most certainly, my R4 middleweight.
This account is in a state of dimensional flux
Top
Post Reply
905 posts