1 weight class (arbitraryweight), 8 entries. No "tee hee reserve uwu", post a robot or you're not getting in. I will give priority to the following entries: Signup Deadline: You have a week from when this post goes up. Tournament starts the week of April 12th.
Arena: The Ventus Storm Refuge (see spoiler below) will be used for all rounds. The one and only stipulation is that the bird statue hazards will not be present (i.e. Omen cannot be spawned) in winner's finals, loser's finals, or the finals.

Bracket: 8 robot bracket, double elimination. No "bracket reset" in finals.
Writers: I will be writing all the matches myself.
Entry List: Entry and Tournament Rules:
RPs shouldn't exceed 300 words, not including things like statlines or "good luck"-type messages. There's no penalty for submitting an RP over 300 words, but I'm also not obligated to read your 15 page thesis on why the opponent's wedgelet setup is slightly suboptimal. Go play chess or something if you wanna overanalyze things, dweeb.

Configurations must be declared on the forum by Wednesday of a given round. You are allowed to have a maximum of 2 statlines and 3 total configurations. Any change to your robot at all will be counted as a configuration and must be declared. If you don't declare by the deadline, I will declare for you, and you're not gonna like the one I pick.

Rounds will occur every other week and have a deadline of Saturday 11:59 PM EST (8:59 PST, 4:59 GMT). Requests for extensions must be made beforehand.

All entries must have at least 1 static image (jpg, png, bmp if you wanna act like a sociopath) and a statline labelling each stat. In other words: if you really have to do the X/X/X/X/X thing, at least mark each stat with something along the lines of "X spd/X tor/X tra/X arm/X wep". If you don't, I reserve the right to "accidentally" (read: purposely) misinterpret what your stats mean.

Combat Rules:
This tournament will be using a heavily modified version of the standard ARC ruleset. General list of changes is as follows: 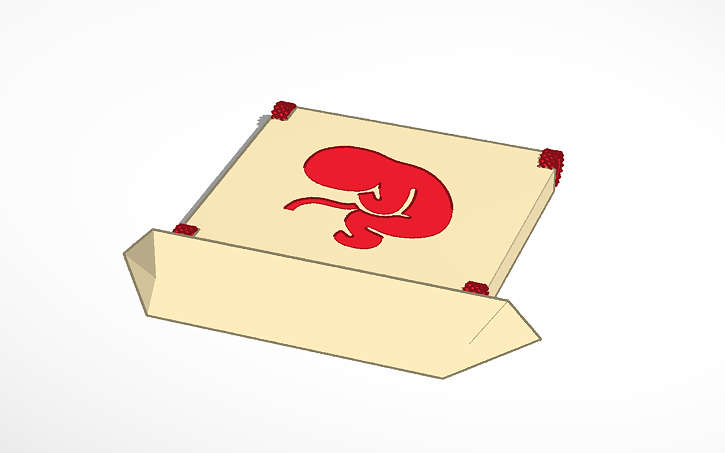 Anyways, Dead Baby Cannon is coming: 9 speed, 7 torque, 8 traction, 1 weapon, 5 armor
Where is the cannon, you might ask?
Well, the fetus symbol (note: not the whole top, just the symbol) on the top can pop open, and it shoots out small fetus like dolls, which are brittle and filled with a red, jammy blood-like fluid.

What, did you think it would shoot actual fetuses?

I may crtl+v other bots from time to time, but I'm not THAT bad!

(Also note that the fetus symbol, when popping up, can function as a srimech)

Entrant pulled out, robot is stored in spoiler above.
Last edited by Tcrrr on Sun Mar 29, 2020 4:08 pm, edited 5 times in total.
Team Code Pink Robotics: are we good yet?

Speed: 8 Traction: 7 Torque: 3 Weapon: 0 Armour: 12
4-wheel driven hinged bricky wedge, as stubborn as an Apennine Wolf! The flag is purely for decoration and will snap off when flipped, the wheels stick out of the back slightly to ensure that (hopefully) one wheel will be on the ground at all times. All of the underall wedges are hinged individually on the same axle [INSERT IRL EXAMPLE HERE].
Last edited by Botomatic1000 on Sun Mar 29, 2020 1:46 pm, edited 3 times in total.
Top 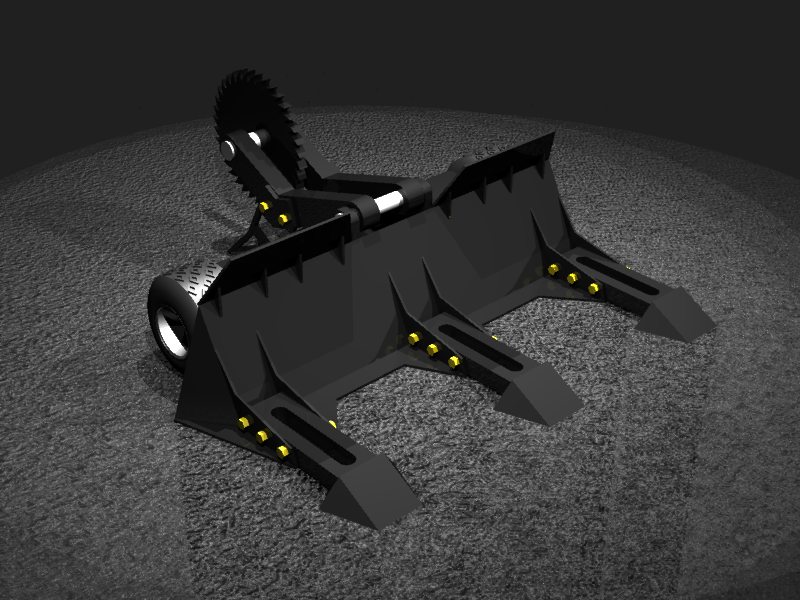 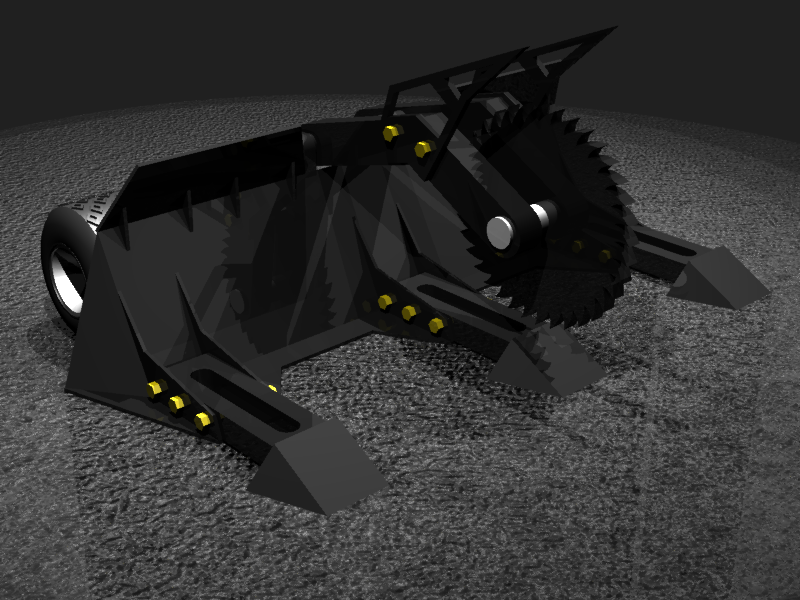 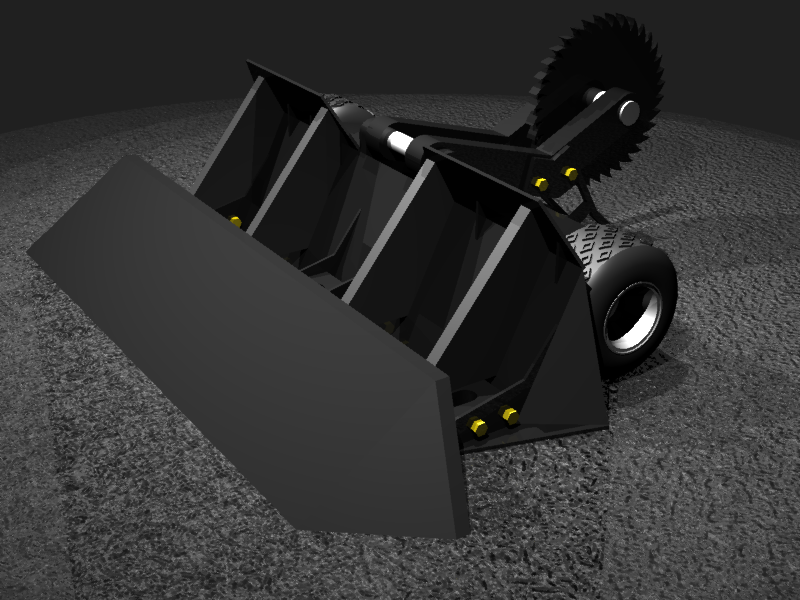 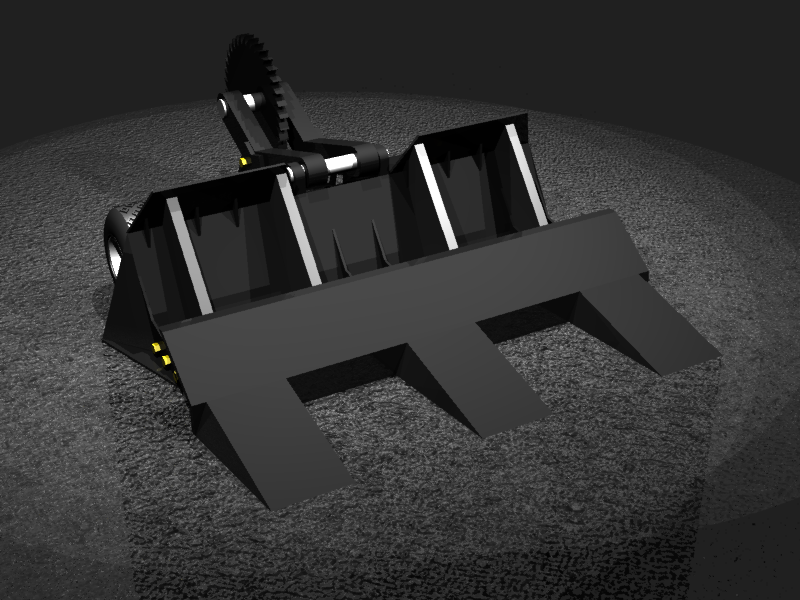 2wd sawblaze knockoff. Utilizes rubber sheets in the anti-spinner config, much like the real one. Two different anti-spinner wedges, one for horizontals and one for verts.

Drum spinner based on an old design if mine. Wedgelets are hinged and designed to bypass wedges. Weapon is powered by 3 belts, the meaty one in the center and one belt in each support. It is invertable, and the back wheels cannot be stranded when wedged.

Y'all RA2 peeps know what's about to go down, this dies several times to real competitors.

Please include a static image of your robot. Otherwise, I'll just screenshot your sketchfab embed and edit that into this post.
Team ETHER 12-11
REDDIT: 3-2
CBC: 9-9
Top

Static pictures and stats incoming. Otherwise you know what this is, right? Bonkers looking orbital hammer with big convex HDPE wheels to soak damage. It might get a stat change. Stay tuned!

If you don't include a static image, I'll just edit in a couple screenshots of your sketchfab embed. If you don't include your stats though, your spot goes to whoever #9 is.
Last edited by Killjoy on Sun Apr 05, 2020 12:19 am, edited 1 time in total.
Top

A huge 1.2m Vertical spinner with inline mecanum wheels for strafing. Hinged wedges at the front to help prevent being wedged. Wheels are inline with the disc's axle to counter gyro forces when turning. 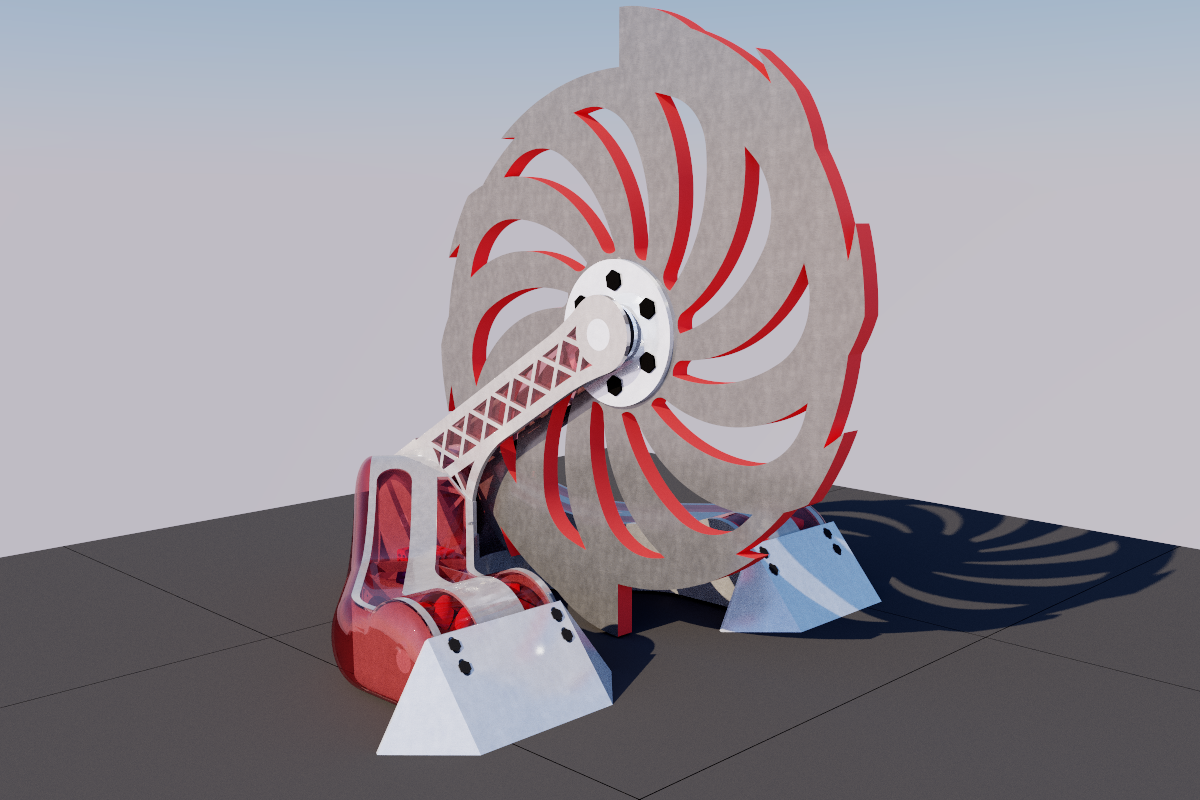 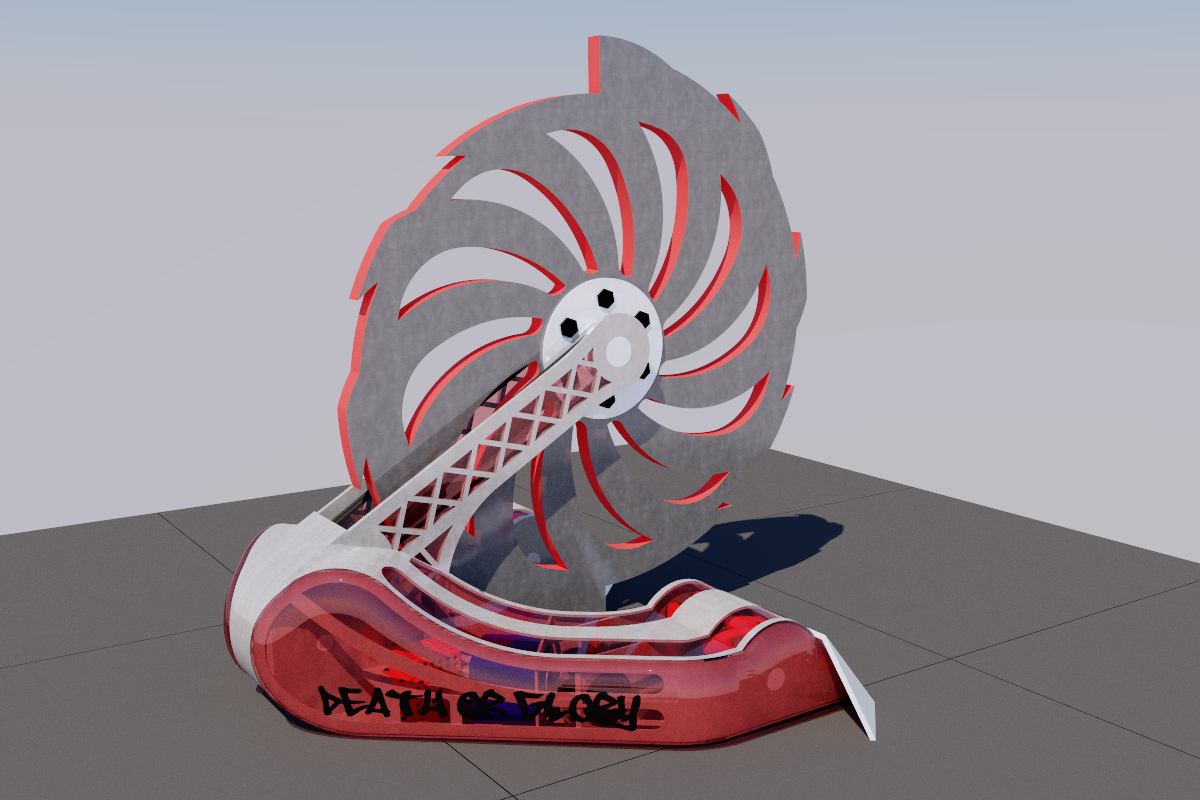 I see at least 3 bots that where entered into something before and noah said that bots that haven't been entered before into anything get priority so i should be able to get in if i put in something new.

bot
yes that is the bot name 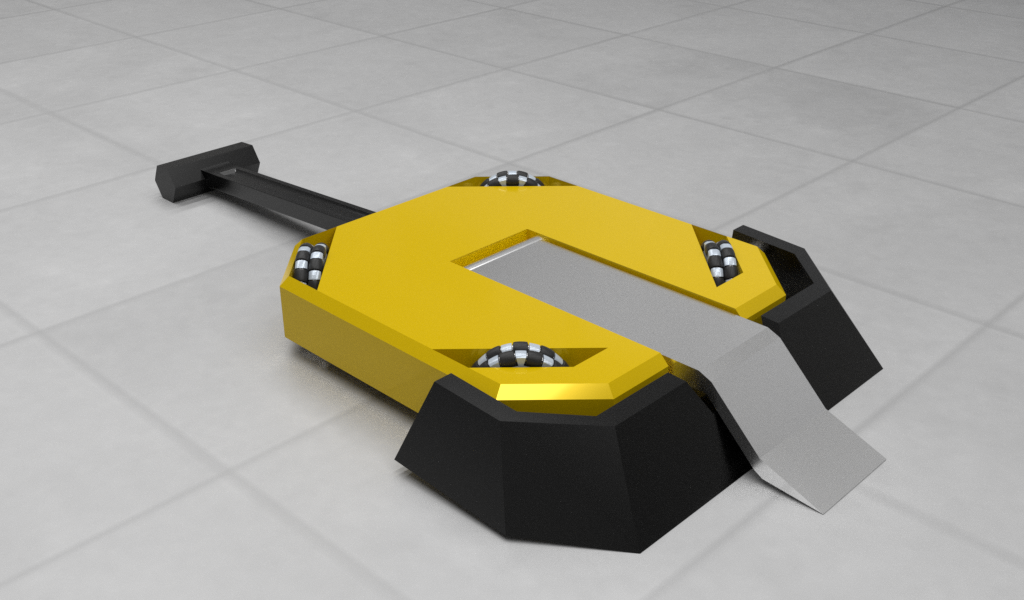 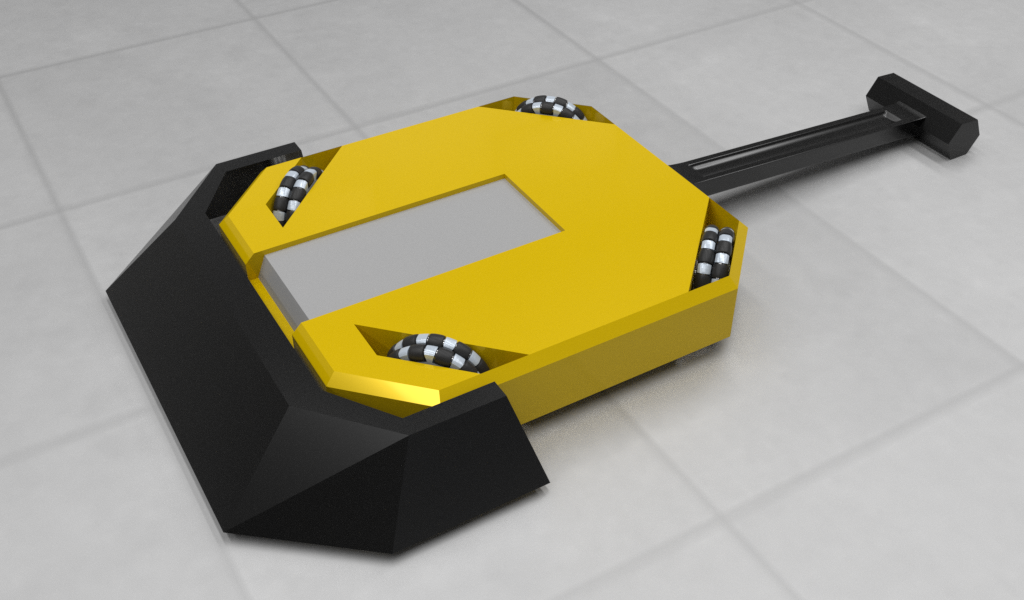 Stats: The wedge is hinged, the rear twack thing is also hinged, the flipper is rear hinged.
How dare you put the signups early in the morning :V

I'm not counting Thunder Underground as a re-entry because the tournament died in groups. You'll be included in the post-finals rumble, however.

Tcrrr pulled out, so you'll take his spot in bracket.
TEAM DESIGN FLAW
Recent history
Yeezzus this signature is too big, lets try to make it a bit more compact