ROBOT4
Signup Deadline/tournament start: May 30, 9PM PST (May 31st, 12 EST / 5 GMT). tournament will start IMMEDIATELY - absolutely no late entries accepted, there's people in queue behind you who will be admitted instead.

Specify which weight classes you are reserving for when you reserve a spot. There will be a re-check of interest 1 week before signups close, just to make sure y’all’re still in like sin. If you got a * next to your name you're on the reserve list

500 word soft limit on RPs. If you exceed that limit more than once and it pisses off the writers you get a hard 400 limit. I know I’m saving mine for a finals.

Don’t be a dick. If you are a dick, expect to suddenly see an FF that has you getting killed in an amusing fashion. Trash talk is obviously allowed just keep it at some semblance of friendly. ALSO don’t read your opponent’s rps. The point here is to have fun, not to cheat.

Spin2win is a fine RP and a 2 sentence summary is a fine result, if that is what the match requires.

Fights are Judged on Aggression (knows when to get aggressive, initiates fights, chases down disadvantaged opponents), Damage (or, in the absence of damaging weapons, overall effective use of weapons/arena), and Control (knows when to retreat, quickly escapes from disadvantaged situations or uses them to their advantage, accommodates for arena and abilities of their and their opponent’s bot)

Building rules:
All robots submitted must include at least one still image (and are encouraged to contribute multiple images or a sketchfab render or whatever the fuck V900 does with his backdrops), and a description that clarifies anything not immediately obvious in the render.
ARC Ruleset: https://docs.google.com/document/d/1ka3 ... JtECk/edit

I will be modifying the rules as follows:

==> Repeated Hits Damage:
If Your Weapon equals your opponent’s Armor, you will still be able to break through that armor in 12 hits. For every point of weapon you are below their armor, it will take 2 additional hits. For every point of weapon you are above their armor, it will take less hits to puncture an opponent’s armor, as noted here:
damage: 0>1>2>3>4>5>6
hits: 12>10>8>6>4>2>1
These rules are guidelines for the approximate time it will take you to destroy a single location on your opponents: situations in-match may adjust the exact numbers, and if yall flame writers for not saying the exact numbers of hits and shit, don’t expect to get away with it.

==> Crushers Deal Damage Like Saws, and can be multi-speed for no point investment. Chainsaws act as Saws.

==> Hammers Deal No Bonus Damage, do get +1 shock damage

==> Melties get +5 to traction for the purposes of spinning up, Speed+weapon cannot exceed 18

==> A bot with a -2 control ratio is capable of being flanked EVEN IF it is faster than its opponent if it has lost control. this is left to writer’s discretion: I will be writing it at something like a 10-15% chance, I think (subject to change with staff conversations)

All wedges must be on an active weapon or directly helping the functionality of an active weapon. provided you're doing something silly or creative this rule will be pretty lenient. if you try to powerbuild, expect this rule to be enforced to the letter.

Any continuous spinning weapons (spinners) are limited to 8 power maximum

The spirit of sportsman is innovation and creativity: dont enter a one power flipper

Posting and Strategy Guide:
500 word limit, not 400
Part One:
1.2: poor control can lead to exposing oneself to a flank, regardless of the speed difference between opponents

1.3: Pushing Speed is the midpoint between Speed and Torque

1.4b: No +4 bonus for weapons with a diameter larger than the largest axis of your robot (reversion of shell/overhead buff)

2.3: Hammers deliver only 1 bonus shock damage
Part Three:
3.1b: Hammers deliver 1 bonus shock damage, no other bonuses.
3.1c: Crushers now lumped in with saws in 3.3
3.2a: More than 5 power invested into a lifter will make it uncontrollable
3.2b: Clamps act equally to lifters, this section adds unneeded complexity
3.2c: Turrets do not get a +2 bonus to their movement speed, but are not punished for investing more than 5 points: point investment acts as a functional separate speed stat for the turret.
3.4: 2wd static and hinged wedges function equally (this isn’t updated in the main ruleset yet for whatever reason :V
3.5b: rule rescinded for this event, chainsaws function as saws
3.5e: vertical thwacks will use the midpoint of their speed and traction to deal damage
3.5g: holy shit that’s overcomplicated. Melty-brains get +5 to traction for the purposes of spinning up, and weapon+speed cannot exceed 18
3.5h: the “chopsaw” rule applies to any spinner with a lifter, provided they work on the same plane or in concert with one another. You many not adjust weapon armor bonuses between configs if you benefit from this rule.
Part Four:
To represent their weight bonuses: Walkers get 2 extra points, and are limited to 5 speed. Shufflers get one extra point, and are limited to 7 speed. Shufflers and Walkers must adhere to sportsman rules in all divisions, and are given no weight (and therefore no stat) bonuses in the sportsman division.
Part Five:
5.3: Three (3) Total Configs are Allowed. Two (2) Stat Lines are allowed Total. All Configs that change stats or weapon archetypes must declare by Wednesday.
This limit includes ALL variables: wedge variations, hammer blockers, mobile armor bonuses, wedgelets, etc.. Be creative with your 3 options.
5.3d: Rule rescinded for this event, there will be no stat penalties for stat swapping between configs.

Located in my doomsday tunnels underneath Charlottesville, North Carolina, it's The Pit!

the purple hazard spins clockwise, and deals 5 damage. the arena is 24x24'. the step around 3/4 of the arena is 1'6" off the ground, and 2' deep: if you stay on the step for more than 10 seconds, a countout will begin - this gives you a maximum of 20 seconds on the step at a time. It didnt render the starting squares so I'll re-do that when I can ignore my computer while it renders for like 16 hours again. there's two corners without crap in 'em, they go there
Top

OK time for a draft of my actual team

probably something like 4/2/1/15/8 or 5/3/1/14/7, with at least a point of weapon armor bonus taken for a articulation thingy. Featherweight Sportsman: idk the meta could go anywhere
(name pending)
This was my plan but Gabe made this single elimination and this is so going out in round 1
Show
Stats:

5/4/1/12/8
5/4/1/10/10(+2 wedge)
a point from weapon armor bonus taken to power the weapon arm thingy
or something like that All renders not final
TEAM DESIGN FLAW
Recent history
Yeezzus this signature is too big, lets try to make it a bit more compact

LW: Tidal Wave II
".. if Kody is removing OOTAs, I'm flying to Canada for the sole purpose of taking a shit down his chimney.

Reserving for all 3 weight classes 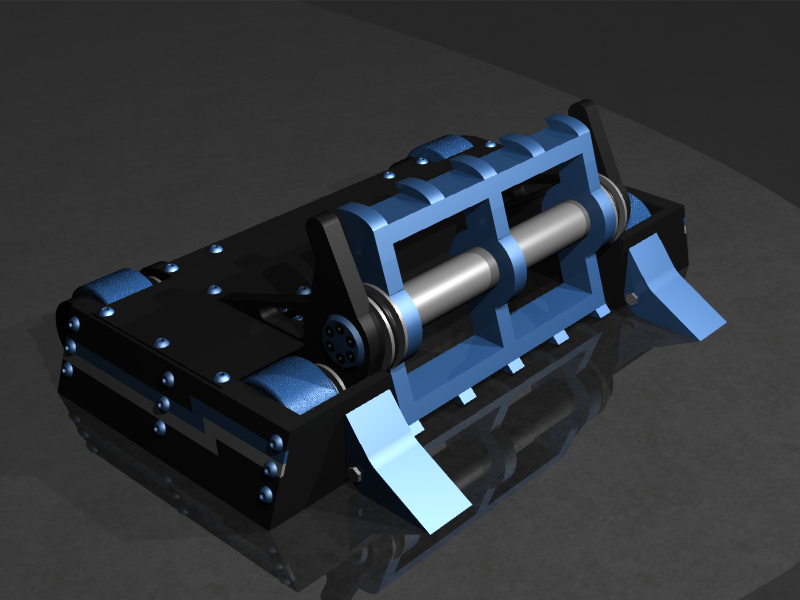 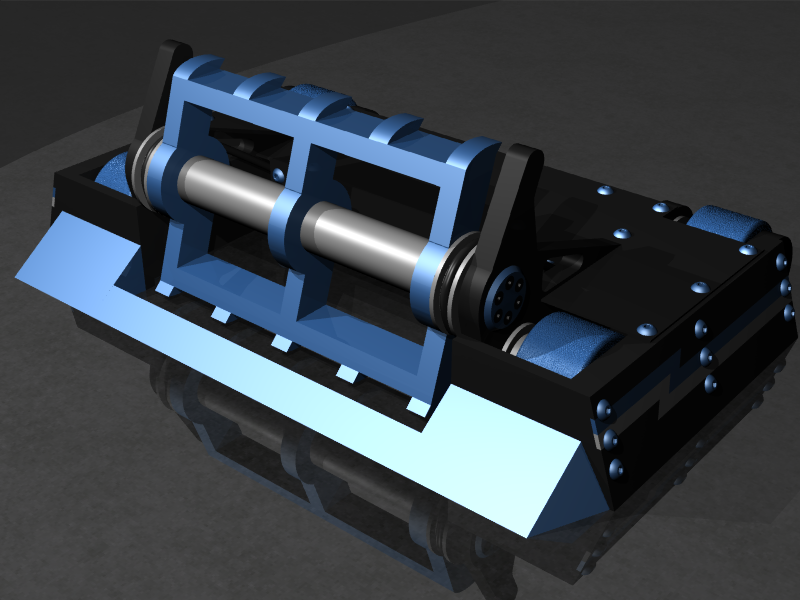 4WD eggbeater. Fully invertible, can right itself with weapon kickback. Front wedgelets are hinged and interchangeable with a static armor plow. 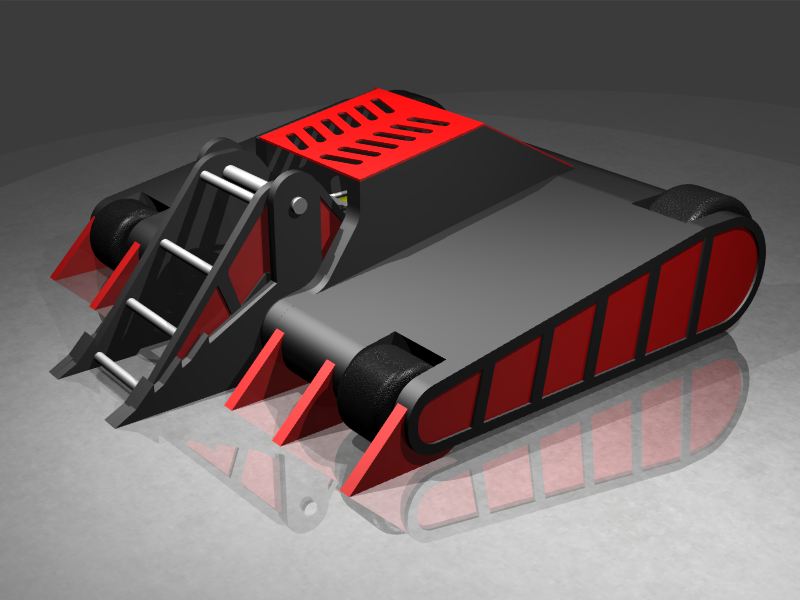 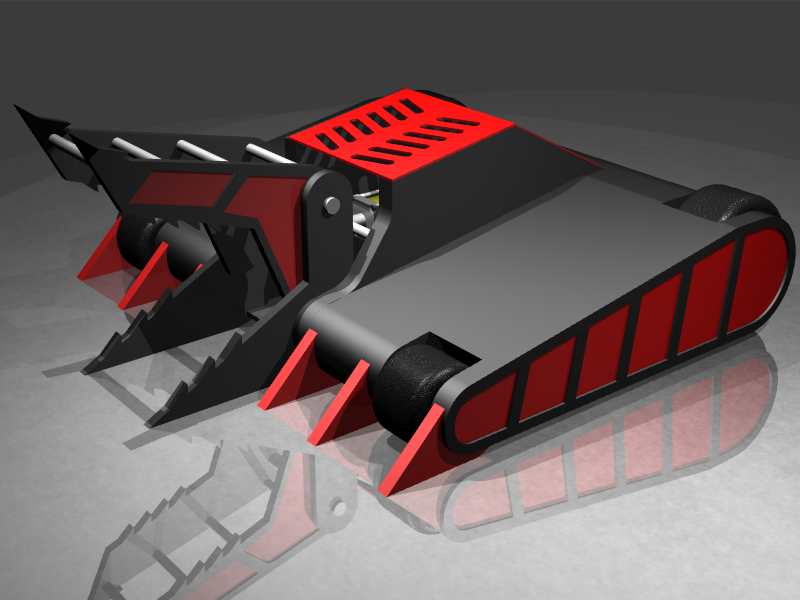 Pneumatic flipper/clamp that utilizes a double-action cylinder so it has the same power behind both its flip and its grab. The entire weapon assembly is hinged at the back of the jaws.

FW: Deposit This In Your Bank Of Choice

Sounds of a breakfast nook exploding

Kiwi drive invertable ring spinner. Nothing too fancy, aside from all the glowy shit, and having a reversible spinner.

LW: This Side Down

Tentatively reserving for all 3. Will realistically drop one later, but still not 100% sure which.

Here we go again! Put me down for all weight classes.
AQUATIC ROBOTICS

(in this version the lifter is bolted into position and the spinner becomes the main weapon making it a slandered 4 wd drive vert with a single prong to get under, the design stays the same however it will no longer be able to self right)