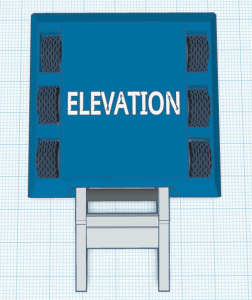 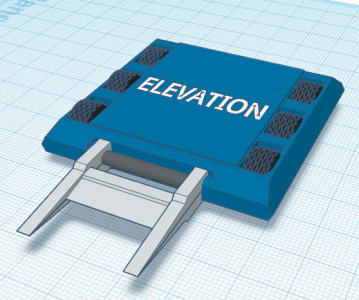 Ok, so this is my design for the classic Robot Wars style, It's a 6WD robot with lifitng forks that can operate up and down which has a Panic Attack style, the design can run inverted.

Lifter/clamper with a pneumatic ramming rod/bar to push or flip things. The lifter can right the robot and has about 160° of movement, which allows for the spike to hit underneath the robot. Comes with a sharpened titanium front (forks optional, any one or all) and foam wheels. Motors came from a Segway PT (we bribed the police man with toaster strudel and donuts).

Giant overhead disc with 5 low-reaching teeth powered by a prototype of the 4-mag gearbox that will later be used in Tornado Mer to cause the absolute extermination of everything it will fight, now if only the team didn't forget that armor was a necessity

It was a cold winter in Kazakhstan in 1997, 2 brothers (Salvio Prudak and Ivan Prudak) were in their garage powering up the robot base they had been working on for the last 3 months, having gathered old car wiper motors and scrap steel to bring their creation to life, they had watched the first series of Robot Wars and got instantly hooked, their favorite bot was Killertron so they took heavy inspiration from it while assembling their machine. Now all the hard work was about to pay off, they turned the switch, powered up the remote, held their breath and hit the stick, AND IT MOVED! They nearly jumped with excitement that their passion project was finally alive. The only issue was they lived pretty far away from RW and they didn't have the money to travel that far, so unfortunately their creation looked like it was gonna be garagebound for the rest of it's days, but hope lied ahead! An event popped up closer to them many months later (this tourney now canonically takes place near Kazahkstan loool), and they saved just enough to get there, now they have arrived with the biggest grins on their faces, they don't expect to win but they are ready to have a great time with their bot ARMAGEDDON! 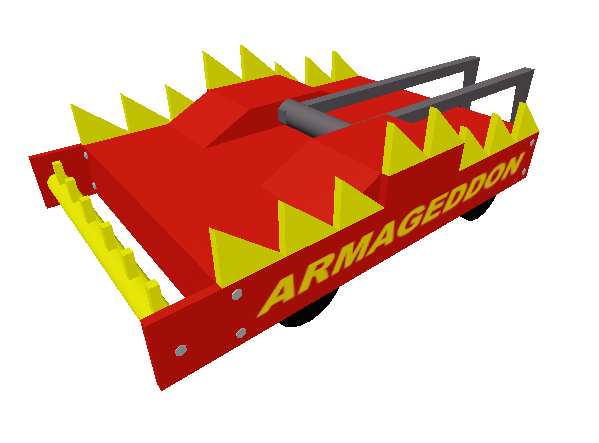 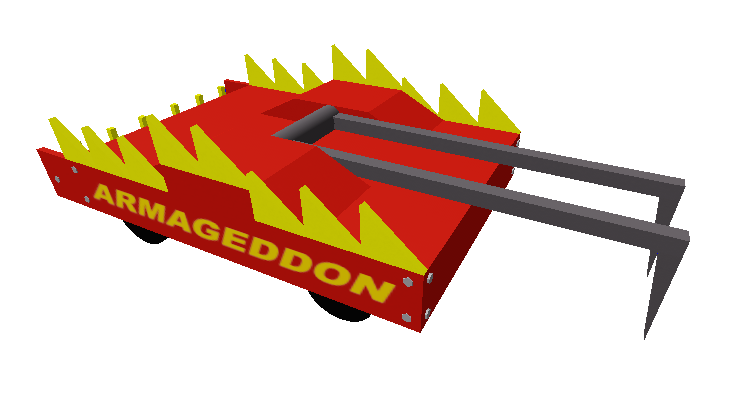 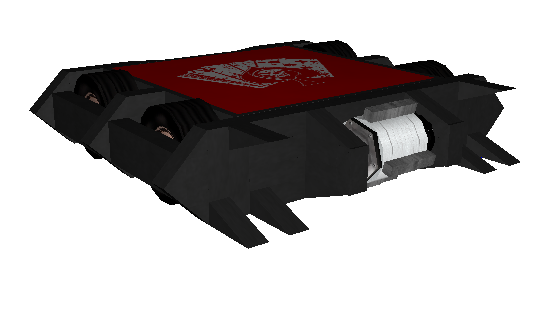 All static, with the typical "Fuck it here's a weapon" drum that was ever so common in the early 2000s

Need a last minute entry for an even 20?? Here's Sekhmet! 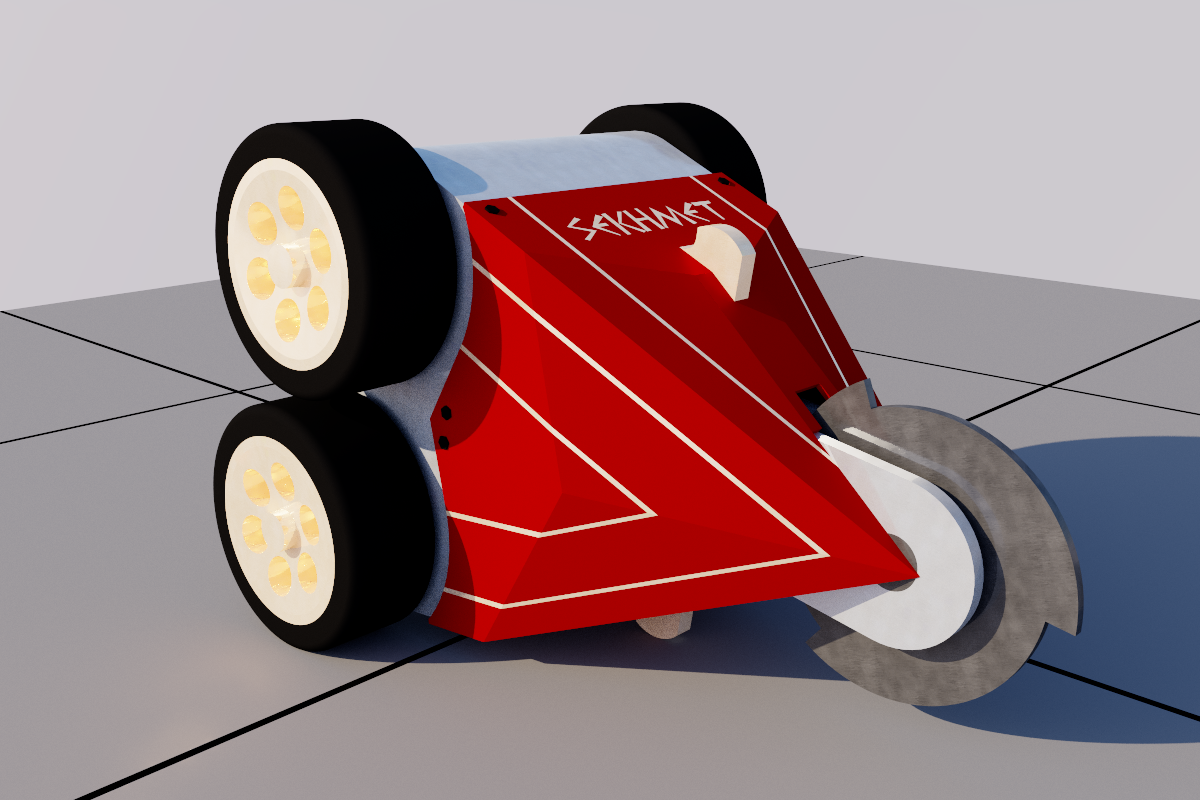 Blatant Pussycat clone. Small vertical blade designed not for knockout blows but to deal consistent damage all over a bot and to snipe wheels,chains,etc. 4WD with torque reaction to change sides and stand up and roll back to it's wheels if it on it side.
Top

A little bit late getting it finished, but here's my bot! 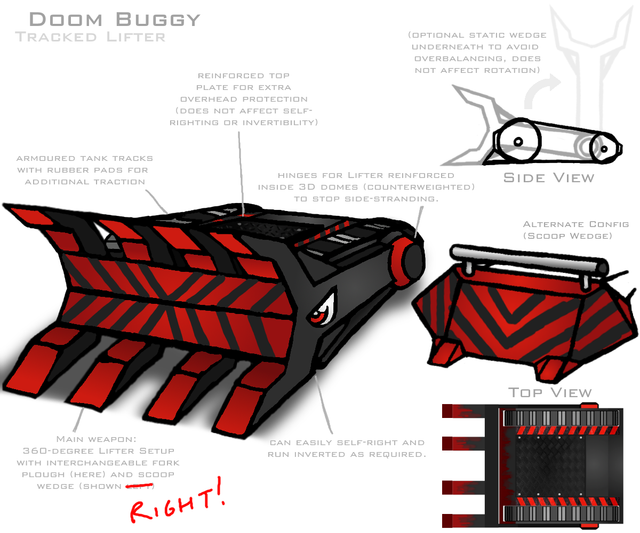 Straight from the heady days of Robot Wars Extreme comes this big, brutal beast of a bot! Running on tank tracks and covered in thick armour (and a reinforced plate up top for slowing down hammers and looking pretty boss), it’s equipped with a Probophobia-esque 360-degree lifting arm setup that can comfortably hoist over 150kg, and plenty of speed and torque to take the fight to pretty much anyone. Coupled with a different, Behemoth-inspired wedge scoop for standing up to even the heaviest weapons, it’s one tough machine that won’t be easy to keep down.

NOTES: Can self-right in either configuration. Has a removeable wedge underneath the front of the weapon to stop it overbalancing when it lifts an opponent up. Inspired mostly by bots like Behemoth, Probophobia, Robo-Doc/101 and the general aesthetic theme of early RW bots, complete with the angry eyes, exposed chequer-plate and hazard tape)
Top


Here to send you flying is Tartarus Robotics Group's blast from the past, Danger Zone!

This motherfucker is named after the Kenny Loggins song from Top Gun! How cool is that!? It also looks straight out of 2001 with its non-angled plow just begging to be nom nom nommed by your horizontal spinner. So what does it have going for it? How about a REALLY powerful flipper? That's right, bitches! You're not safe anywhere in that teensy little arena. Danger Zone laughs at you (and then takes you out with the trash)! I'd make a Top Gun reference, but I don't watch old movies, so ya.